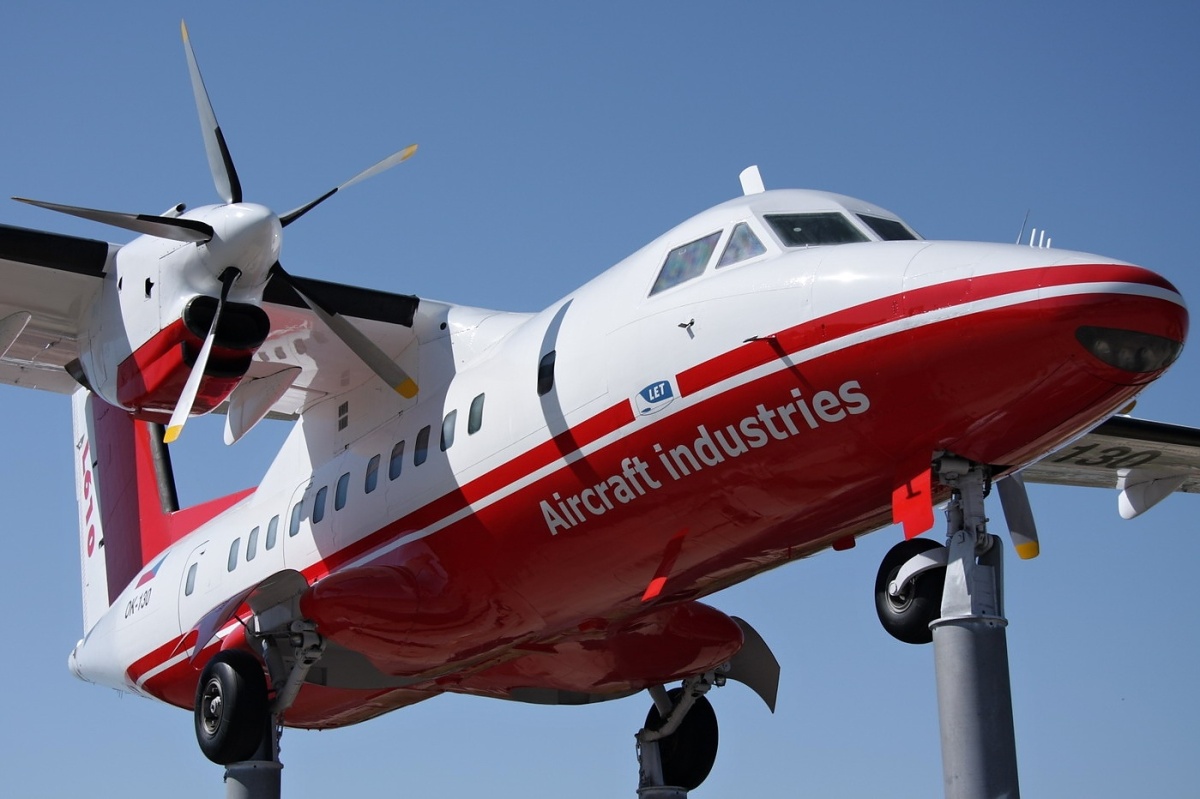 Let L-610 Tubolet is a prototype of the aircraft, which was to be a successor to today successfully produced machine series 410. Although it is a successful project, which was just before the final certification, did not end up due to the repeated change of owner of mass production. In recent years, however, much has begun to talk about resuming development and starting production of this project. This information was confirmed in 2019 by the Russian owner of the Kunovice plant, saying that production is scheduled to start in 2023. Despite his unfavorable fate, which he met at the beginning of the new millennium, he could finally see mass production. Surprisingly, however, the film had its premiere much earlier, when the hull of one of the prototypes was used by filmmakers in the 1990s to record one scene in the film Accumulator 1.
The study and scale model of the twin-engine variant was introduced in 1981. For this machine also underwent the development of a new engine M-602, which, however, from the beginning expected difficulties in development and so was also considered a four-engine variant of the aircraft. This modification should be equipped with an older, but proven type of engine Walter M-601. In 1985 it was decided to abandon this idea and the development team continued on the original design of the twin-engine version. Engines, however, were not the only thing that was developed specifically for this aircraft. A new low-speed five-blade V518 propeller, the auxiliary power unit SAFÍR (for starting engines, ground-based air conditioning and emergency power supply) and another 200 instruments and aggregates for various aircraft system functions were also created. Demanding tests of individual systems carried out in our country and then the USSR, were tested on several differently modified aircraft. For example, the fuselage of the Avia Av-14 was used as a functional model for testing the electrical system, the navigation system was tested on the L-410 UVP-E aircraft and to test the power unit was again flying laboratory IL-18LL.
The first take-off of the L-610 prototype took place on December 28, 1988 and a short documentary called Six Degrees of Freedom was made about this success. By mid 1990, three more flying machines and two specimens were made for breaking and fatigue tests. In the same year, negotiations began with GE, today’s manufacturer of original Czechoslovak M-601 engines on the installation of western engines into the aircraft. Between 1992-7 there were two other prototypes of the L-610G designed for the US market with proven General Electric engines CT7-9D and four-blade propellers Hamilton Standart HS 14 RF-23. Aircraft with Czech engines then for pragmatic reasons got a new designation L-610M. Prototype XL-610M X05 (see photo gallery) was until 1994 tested by the Czech Air Force, but the inclusion of equipment, however, never received.

Certification of L-610M aircraft was expected to be completed in 1994 and delivery to first customers early next year. The approval of the L-610G variant was foreseen for 1997. In May of the same year, a second specimen of this type, which fully complied with the US FAR 25, took off. Unfortunately, it was also the last flying machine series 610. After the change of ownership, which was then the American company Ayres Corporation Inc., the aircraft began to use the designation of the Ayres 7000 from November 1999. One of the prototypes L-610G, which this company transferred to Demonstration to the US, stood in 2018 in poor condition at Southwest Georgia Regional Airport, where the now bankrupt company Ayres had its headquarters. In 2004, the company was taken over by a new owner, who decided to continue the production of the L-410 aircraft and definitively end the L-610 project. Unfortunately, the planned anti-submarine version of the L-610MPA, which was based on variant G, never happened again. In 2006, all the remaining production jigs and unfinished aircraft were written off and destroyed.Fortunately, however, managed to save a few exhibits and survive to the present. One complete machine, two fuselage and wing machine exhibits Kunovice Aviation Museum. The manufacturer is currently working on a complete reconstruction of the complete aircraft to its original form. How much of this work has been progressed could be assessed by visitors at the 2018 production plant open day. The restorers want to finish the works and present the refurbished aircraft by 2021, the 40th anniversary of the study. Next and last complete aircraft with matriculation OK-024 exhibits Aviation Museum Olomouc. The L-610 also has several … tops. It is the largest transport and transport aircraft designed for regional transport. It is also the first Czechoslovak aircraft developed with a pressurized cabin and integral fuel tanks.

The flame of hope burned

In 2017, information about the renewal of the L-610 project by the Russian owner appeared. In September 2019, this intention was confirmed by the Russian Minister of Industry and Trade Denis Manturov. Development and production is to take place exclusively in Ekaterinburg Urals Civil Aviation Plant (UZGA), which is currently assembling L-410 from Czech parts. Paradoxically, the tense relations between Russia and Ukraine helped to revive, subsequently take over and complete this program. At the time of the Soviet Union, virtually all production of small and medium aircraft was located outside Russian territory (especially in the aforementioned Ukraine and the Czech Republic). L-610 flight is to become a direct replacement of outgoing aircraft type Antonov An-22, An-24 and An-26, which has the local air force from domestic sources to replace. This fact was confirmed by the order of 10 pieces of Yakutia Polar Airways at the international aviation fair MAKS 2019. The first aircraft should be received by the airline in 2023, on the other hand the last one in 2025. the new L-610. According to the General Director of UZGA, the machine should have greater maximum takeoff weight, cargo capacity, range, cruising speed, modernized fuselage design and of course the latest avionics compared to the original 1988 prototype.