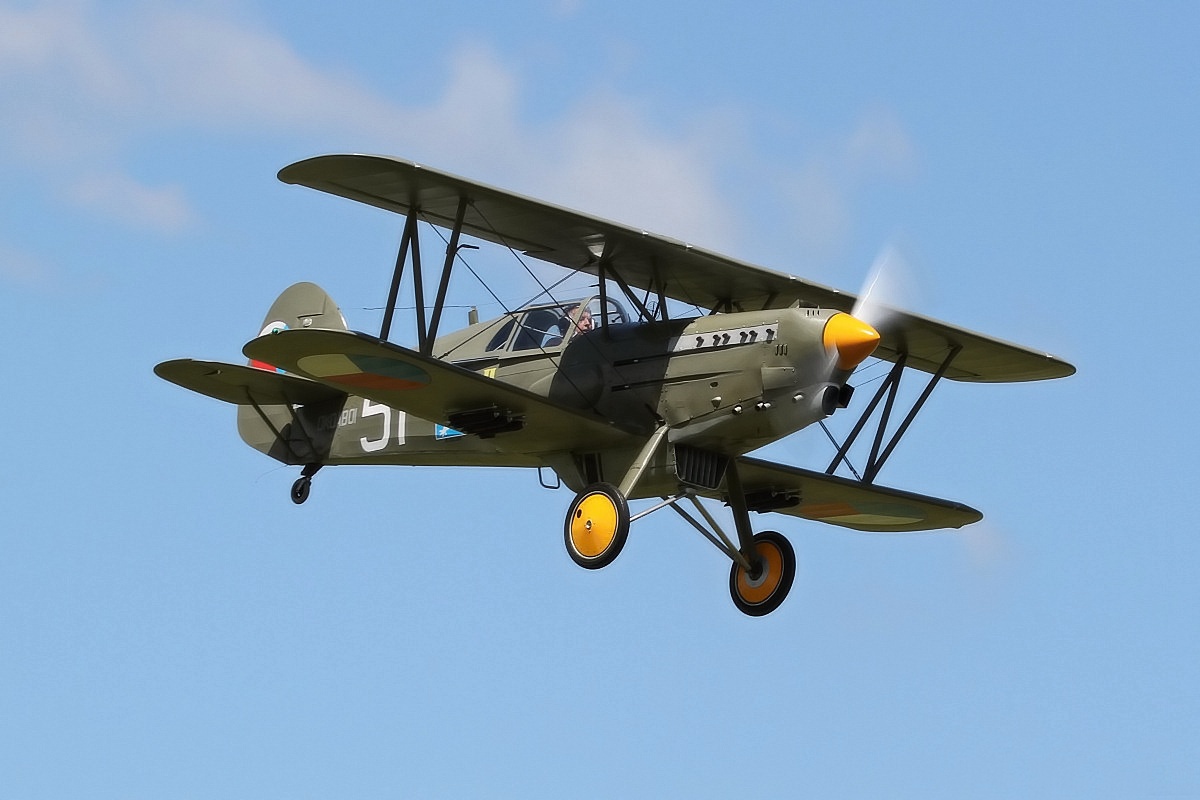 Avia B-534 was a Czechoslovak fighter biplane, which was in the second half of the thirties the backbone of the Air Force of the First Republic and since 1938 also a standard aircraft Gendarmerie air patrols. Thanks to the successes collected on these machines by our pilots during various competitions (such as Zurich 1937), Avia soon enjoyed great popularity. Despite these characteristics, unfortunately, after the war, not a complete piece of about five hundred specimens produced. However, thanks to the efforts of enthusiasts from VHU Praha, STM in Košice and former captain of the transport aircraft Stanislav Fiala today there are three replicas of this beautiful machine, the youngest of which is even airworthy. This beauty got her chance to appear on the screen in Once Upon a Paradise, shot in 2016.

Due to the deteriorating foreign-political situation in the early thirties announced the Ministry of National Defense (MNO) competition for a new standard fighter for the Czechoslovak Air Force. In 1933, the team of engineer Ing. František Novotný to develop an entirely new machine from the older not very widespread Avia B-34. The result was an elegant biplane with an open cockpit and a fixed landing gear, powered by a licensed engine Hispano-Suiza 12 Ydrs of 632,5 kW. Unlike competing airplanes from the factories Letov and Praga excelled mainly in its maneuverability, excellent climb and relatively high speed. The air was first raised as early as 5 September 1933, and after minor adjustments made during the tests was 14 April 1934 presented to the public at Kbely Army Air Day. On that day, the boss pilot Avia V. Kočí managed to create a new national speed record with an average speed of 365.744 km / h with the second prototype. In July of the same year, the MNO decided to introduce the aircraft into ordinary service and at the beginning of the following year concluded a definitive contract for supplies to the Czechoslovak Air Force.

Most sources say that the aircraft were delivered in four series marked with Roman numerals, which eventually added one series version of the Bk. Due to changes resulting from the new requirements of the military administration, which the factory after the delivery of materials realized gradually four variants, which were again marked with Roman numerals. The documents were usually supplied by the Military Technical and Aviation Institute (today VZLU), but some of them also resulted from the newly modified technical conditions of the NGO. Many of these requirements were made retrospectively on the machines, and therefore, several variants of this biplane appeared in the same series. For example, let’s say I supply aircraft in which the machines were serial numbers 2-147, but the first Avia B-534 II, so the second variant had a serial number 102. The actual designation of the airplane was then interesting because it was written in three different ways and B-534, B.534 or B 534.

The construction of the machine was basically the same, differed only by changes made on the basis of the aforementioned materials from the then VTLÚ and MNO. It was a single-engine strut biplane with a metal skeleton fuselage, wings and fixed and movable tail surfaces. The truss structure of the fuselage was not welded, but was made of steel pipes connected by rivets and screws. Only the front part of the airframe (from the engine bed to the cockpit) was covered with aluminum sheets, some of which were riveted to the structure, while others were removable. The rest was covered with canvas. In-line engine powered two-blade wooden propeller, which had until IV. adjustable angle of attack. The machines of the last mentioned variants and cannon model Bk was mounted on the ground adjustable metal propeller Letov Hd-43. The rigid chassis had a track width of 1,975 mm and Dunlop tires of 800×150 mm or 850×150 mm, but nicely in order.

The machines of this variant include those that were marked with the serial number B-534.2 – B-534.101. They featured two compressor traps located under the fuselage (in front of the water and oil cooler tunnel), an Avia wooden propeller, an open cockpit, bonnet wheels and a tail tail. Initially they were armed with a pair of machine guns vz. 30 caliber 7.92 mm in the lower wing and two synchronized machine guns of the same type in the fuselage, one on each side. From serial number 48, then were supplied without wing machine guns, only with fuselage armament. Ten pieces of this version were additionally installed wiring for night flying (73-75, 102-105, 115-117).

These aircraft (B-534.102-147) differed from the first variant only by moving traps for the compressor under the bow of the machine. The machine B-534.136 tested various propellers, a covered cockpit with heated cockpit and differently shaped tunnels water and oil cooler. Experience with this aircraft was subsequently applied to all machines from serial number 147.

The third variant (B-534.148-173) was equipped with one circular air trap for the compressor located under the bow of the aircraft and the main landing gear. Most of the time, however, this fairing was dismantled because it was quickly clogged with mud when operating at grassland airports. It was armed with four synchronized machine guns, two on both sides of the fuselage. For machines from production B-534.194, the tail spurs could be replaced by a hard rubber wheel with a dimension of 160×80 mm.

Aircraft of this type (B-534.174-455) differed from the previous model by the already mentioned possibility to replace the original two-blade wooden propeller with an adjustable metal Hd-43 from the manufacturer Letov and also a closed heated cockpit with sliding cover, B-534,136. Furthermore, these biplanes had new leading edges of the wings and reinforced keel surface. Aircraft serial number 194-377 had modified internal details of the cockpit, installed radio with antenna and instrumentation for flying at night. This small series derived version was then designated as Bn-534.

Developed was also a new cannon version with the engine HS 12Ycrs, which should be armed with one 20 mm Oerlikon FFS cannon and two synchronized machine guns vz. 30. On the eve of the war, however, began to be problems with the supply of cannons and so at the customer’s decision was the first 55 machines of the order supplied alternatively with a third machine gun. The remaining aircraft of 121 ordered were delivered after the occupation of the country, which then took over (as indeed everything) the occupying army.

During World War II, the German company Erprobungstelle Travemünde modified five machines for launching from a catapult and equipped them with a tail hook. The captured aircraft (Avia B-534 S / N 236 and 440; Avia Bk-534 S / N 501, 592 and 594) were tested in aircraft-sized terrain in 1940-41. However, during the tests, the hook often tore off, so it was necessary to make further reinforcement of the tail structure. After these modifications, the aircraft performed well during test landings. An order was placed for another 10 machines, which was canceled shortly after the agreement due to the completion of the Graf Zeppelin aircraft carrier project.

Although the B-534 was developed to defend the state against the emerging Nazi threat, they could eventually (at least to a limited extent) fulfill their mission only during the Slovak National Uprising. Reconnaissance and bomber unit at the airport Tri Duby (today Sliac), which was later known as the first combined squadron had between its aircraft and three machines (two B-534 and one Bk-534), which used to support ground troops and reconnaissance. Pilots and observers of this achieved several aerial victories. Pilot Ján Lupták managed to destroy three dive bombers Ju-87 Stuka at Poprad airport. Among the most noteworthy, however, is the downing of an unarmed Hungarian Junkers Ju-52 / 3m by the Slovak ace František Cyprich of September 2, 1944. This downing is interesting mainly because it was the last performed with this fighter and also the last on a machine biplane construction. But the end of the war due to combat losses, wear and eventually leaving the insurgent airport survived none of the three mentioned Avia.

The sad truth is that after the Second World War, no complete specimen of this beautiful Avia has been preserved. Static copies of the Avia B-534 displayed in the hall of the Aviation Museum Prague-Kbely and in the Museum of Aviation Košice are reconstructions according to the original drawings created using preserved parts. The first mentioned aircraft has quite an interesting history and before it was restored to its original state it was first necessary to literally collect from different parts of the Republic.

The National Technical Museum hung in the transport hall the entire original fuselage with almost complete engine, but the entire aircraft was missing many components. However, members of the museum gradually managed to purchase the original control lever from various private owners along with some instruments and controls. The last preserved parts, which were parts of the main chassis, were obtained thanks to communication with the Vysočina Museum. All these parts together with the drawing documentation were moved to Trenčín in 1973, where a restoration group led by Mr. Anton Královič worked at the local Aero Club for some time. Here, with the support of air repair Trenčín began the actual renovation of the aircraft. Thanks to Mr. Cyril Chlepka, the original Hispano-Suiza engine, which was first tested in May 1975, was put into operation. The missing wings and tail surfaces were made of wood, the cover plates were then re-fitted according to original drawings and the rest of the structure covered with canvas. The cockpit was again equipped with instruments and covered according to surviving photos.

Thanks to the legibility of the preserved serial number 226 on the skeleton of the fuselage, we managed to find in the archives that it is most likely a machine from the 34th squadron of the 1st Aviation Regiment Tomas Garrigue Masaryk. Based on these data, he got his original period camouflage and regimental designation in Trenčín. This camouflage consisted of the top khaki color and silver bronze underneath the machine together with the Czechoslovak cockade. The aircraft was brought back to the Kbely Museum on June 3, 1975, and its assembly was immediately begun. The ceremonial demonstration took place on 6 June 1975 in front of representatives of the army, air races and the general public together with other aircraft.

At the turn of the millennium, a former airliner captain, Stanislav Fiala, began to flirt with the idea of ​​reminding in some way the glory of the aviation industry of the First Republic. Finally, he decided to build an airworthy replica on a reduced scale (30% smaller than the original) to comply with the regulations for the ultra light aircraft category. For this reason, the basis of this construction became about 10x weaker Walter Mikron III engine, used for example in Vivat gliders or biplanes Aero C104S. However, the whole construction was preceded by a thorough study of copies of factory drawings, detailed photographs of the aforementioned machine from the Kbely Museum and other technical documents.

He started the construction together with his friends in 2002. After he and his colleagues welded the truss construction of thin-walled chromium-molybdenum tubes, he began working on the construction of wooden (unlike the original metal) wings and tail surfaces. The replica first flew in 2009, while this flight also showed the need to strengthen the main undercarriage wheels and spur and improve engine cooling. These modifications, however, increased the total weight, which greatly complicated the certification process according to the then specifications for ULL. Mr. Fiala had to wait until a new category of ultralight aircraft was created in order to complete the process. For these reasons, the aircraft was issued a technical license at the end of October 2012. Since then, the aircraft with matriculation OK-QAB-1 decorated various air days, meetings and similar events.