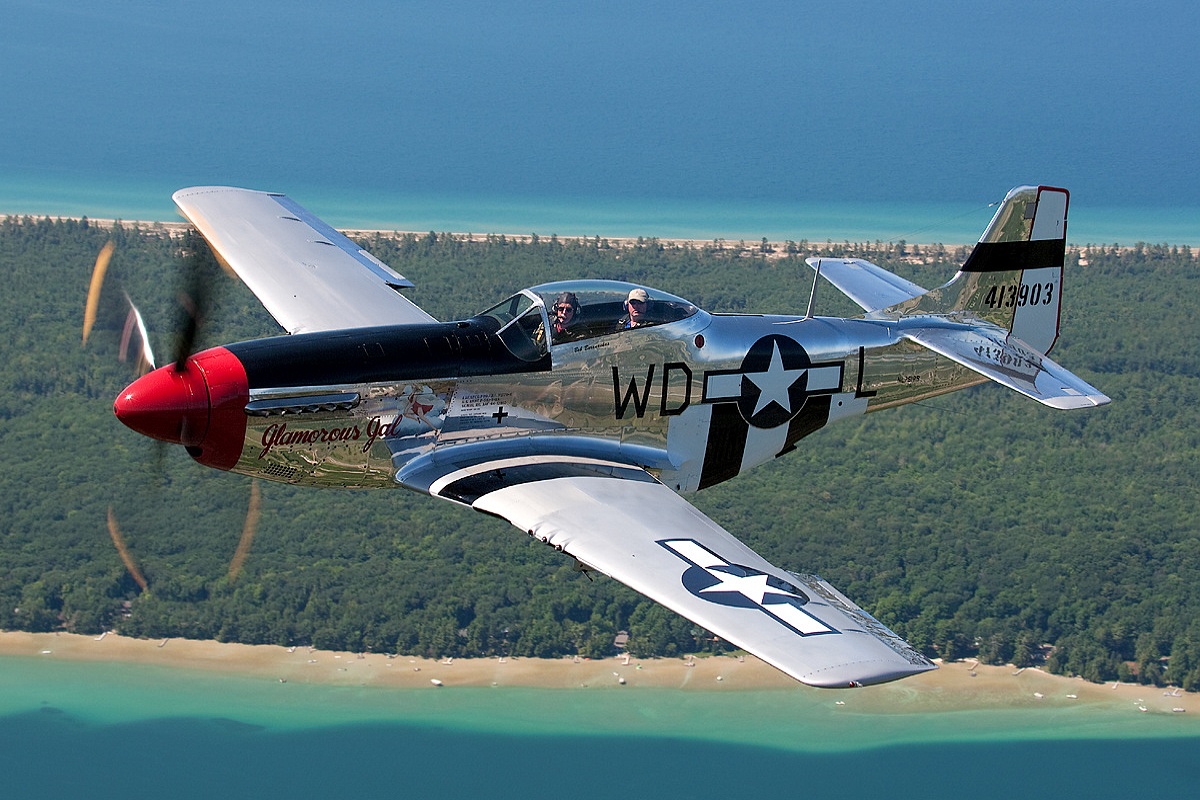 North American P-51 Mustang is a single-seater long range fighter. He became one of the most successful and fastest allied fighter-piston engines fired during the Second World War. During this conflict, it served in more than 40 USAF fighters and 31 RAF squadrons. The aircraft proved to be so good that the Americans used it as the main fighter and battle aircraft at the beginning of the Korean War. The machine is also seen in a number of war films. The most notable of them are The Tuskegee Airmen and Red Tails. It will also shortly appear in one part of the animated Futurama series, freely translated as Rozval Roswell.

In 1940, the British turned North American Aviation to develop a license for Curtiss P-40 fighters, but she came up with her own concept and pledged to construct it within 120 days. The prototype NA-73X first flew on 26. October 1940, 178 days after the order. It was fitted with the Allison V-1710-F3R engine and a new laminar wing profile was used to construct the kite. The armament consisted of four machine guns 12.7 mm and four caliber 7.7 mm. At that time, the RAF had already ordered about 320 NA-73 series machines called Mustang Mk.I. Two NA-73 specimens were tested by the United States Army Air Force (USAAC) under the designation XP-51. Eventually, another three hundred pieces of Mk.I began to come to England on the basis of a second order that the NAA referred to as NA-83 because of small design differences.

The next NA-91 version was armed with four 20 mm caliber cannons in the wing. The disadvantage was the engine that had low power at higher altitudes. The Royal Air Force, therefore, these machines have been used since July 1942 only for reconnaissance and attacks on ground targets at low altitudes. The US Air Force took over 57 Mk.IA versions of British supplies and assigned them the P-51. Later, all these aircraft were also equipped with K-24 cameras and served for armed reconnaissance like the F-6A.

The USAAC has commissioned 150 machines for the already mentioned version, expanded by 310 P-51As with installed F-6B cameras. Their equipment consisted of four 12.7 mm caliber guns in the wing and two 227kg bombs. Allison V-1710-81 engine with a take-off power of 883 kW was selected behind the drive unit. In Britain, under the Mustang Mk.II name, only about 50 specimens of this variation were received. The USAF military unit, which existed only briefly and was the direct predecessor of today’s USAF, has also incorporated into its armament, among other things, the NATO version of the NA-97, known as the North American A-36A Apache. Armament consisted of a total of six large-scale machine guns in the wing, and the Allison V-1710-87 engine with a power of 974 kW, the airplane could carry two 227kg of bombs and was also equipped with tilting braking shields to reduce the speed of dive. A-36A abandoned production lines from September 1942 to March 1943. The Apache battle name later replaced the Invader label and eventually used the usual Mustang.

At the recommendation of Roller-Royce designer R. Harker, the British installed the Merlin 65 engine with a fuel injection of 1,254 kW in the Mustang Mk.I (AL975/G) in October 1942, including a four-spindle propeller from Spitfire. Thanks to these modifications, the performance of the airplane has increased significantly. The Mustang X (AM203) flew in November and the third (AM208) in December 1942. Later, they were powered and tested with the newer Merlin 70 or 71 engines.

Similarly, in November 1942, North American Aviation itself converted a single P-51A into unarmed XP-51B with the Packard V-1650-3 Merlin twelve-cylinder engine with Bendix-Stromberg fuel injection. These engines for NAA were built in the license and supplied by Detroit Packard. Installing the intercooler into the deeper hood at the bottom of the fuselage behind the wing, where the enlarged fluid cooler was already in place, turned out to be a smarter version, leaving a little air trap to the compressor under the propeller cone.

Since the summer of 1943, Mustangas have been produced with Merlin engines on production lines in California as NA-102 (P-51B-1-NA) and Texas as NA-103 (P-51C-1-NT) Browning M2 machine guns 12.7 mm caliber. The British designation for variants B and C was Mustang Mk.III. Thanks to their range, these versions have been able to accompany USAF bombers up to Berlin and back from March 1944. In mid-1944, a successful version of the P-51D with a V-1650-7 engine of 1,095 kW was built, and the equipment in the wings increased to six machine guns. In Britain, this type was called Mustang Mk.IV. Other structural changes included a lowered back and a dripping cabin cover that improved the view of the pilot in reverse. During production, 136 copies were sent to Dallas for the reconnaissance version of the F-6D, and 10 dual-track TP-51Ds were also created.

In the P-51K version, the majority (1 337 pieces) of a total of 1,500 built airplanes had an Aeroproducts propeller with a smaller diameter and a different overlap of the cabin. Later machines were equipped with a launching device for a total of eight missiles. The remaining 163 aircraft were completed in the F-6K for photographic reconnaissance (weapons were retained). From this version, 594 pieces were handed over to RAF under the name Mustang Mk.IVA. Further development was provided by the XP-51F, G and J. Experimental Lightweight Machines. The war production ended with 555 P-51H and 1,700 P-51L series from the previous version. Type H with the Packard V-1650-9 engine of up to 1632 kW was lighter than version D and reached a maximum speed of 782 km/h. Busts for Mustangs during the war were also produced by the Australian company Commonwealth Aircraft Corporation.

On returning from the second raid of the Allied Forces, which took place on August 27, 1944, about fifteen machines belonging to the 332nd Fighter Group were released from the escort fighter. After Captain Squadron commander. Melvin T. Jackson spotted an airplane flying from the airport in Prostějov, pilots attacking idle aircraft. Although the anti-aircraft defense immediately triggered the fire, they managed to destroy a total of fourteen Ju-52s, four Ju-87s and four He 111s at this and neighboring airport in Kostelec na Hané. In addition, another Ju-52, four Ju-87s, one He 111 and even one six-engined Me 323 Giant. However, according to witnesses, they managed to damage not just one, but two machines Me 323 Giant. This event also refers to the Red Tails scene, but unlike the fact, only two pilots take part in the action.

Steve Hinton Jr. surpassed the FAI speed record in C-1e on 2. September 2017 in Northwest Idaho when it reached 885,53 km/h with its machine. It was a modified P-51D Mustang with the N5551VC, which the pilot named Voodoo. With his performance, he was humiliated by Lyla Shelton’s 28-year-old record (820,24 km/h).

**two 1000 pounds on the hangers under the wings