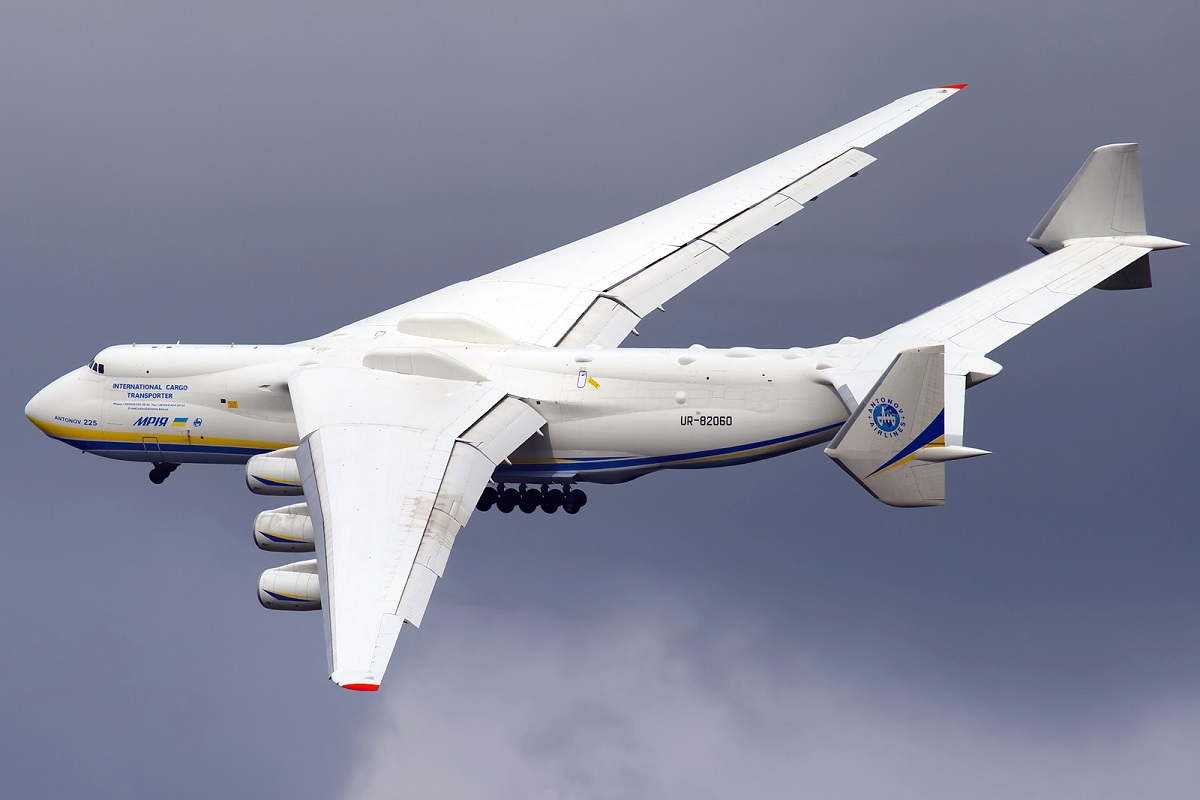 The Antonov An-225 Mrija (Ukrainian for “dream”) was a strategic transport aircraft designed specifically for the needs of the USSR space program as a replacement for the previously used Myasishchev VM-T Atlant. It was primarily intended to transport the Buran space shuttle and various parts of the Energia or Proton launch vehicle. This machine also had its film premiere in 2009, when it could be seen in the disastrous film called 2012. Only one specimen was produced in just about three and a half years, the second was not due to the termination of the space program and the change in the political situation in Eastern Europe completed. The high procurement (roughly CZK 5 billion) and especially the operating costs of the aircraft made a significant contribution here.

The Antonov An-124 Ruslan became the basis for the development of this giant. However, in contrast, the Mrija has an extended cylindrical body in front of and behind the wings. In order to fit three pairs of twin-jet Progress D-18T Series 3 Turbofans on these wings, the designers had to increase their span. At the same time, however, due to the weight of the engines used, it was also necessary to significantly strengthen the overall structure of these bearing surfaces. The undercarriage of this machine has 16 pairs of wheels, some of which are steerable and allow the aircraft to turn on a 60-meter-wide landing pad. Due to the requirements to speed up the development of the aircraft, the only entrance to the cargo area remained the hinged front part of the aircraft. For these purposes, the machine also had the option of lowering the front part using the nose landing gear. The double vertical tail surface was chosen by the designers to ensure proper air circulation around the external cargo.

The first test flight of the machine took place on December 21, 1988 at the Kyiv airport and lasted 74 minutes. By the way, to take off at the maximum take-off weight (640 t), the plane needed a runway of up to 3,500 m. The maximum reach could then be reached 19 minutes after take-off thanks to the ability to climb at a speed of approx. 9.4 m/s. During the first month, since the first take-off, Mrija managed to break a total of 109 world records. Among the most famous is the title of heaviest aircraft in the world, which earned it both its maximum take-off weights (with cargo outside and inside the machine). It is also the machine with the largest wingspan that has flown more than once, as well as the longest airplane in the world.

Brief service in the space program

For the purposes of the space program, it was used for the first time on May 13, 1989, when it carried the Buran space shuttle on its back from Zhukovsky Airport to the Baikonur Cosmodrome. A month later, he also made a static appearance at the Paris Air Show with this Russian space shuttle. On the way back, the crew was forced to land at the Ruzyne airport due to a hydraulic fault. On June 19, Prague thus became only the second foreign city in which he landed. In addition to the space shuttle placed on its back, it was also carrying the debris of the MIG-29, which crashed at the already mentioned parade, in its bowels. In September of the same year, the aircraft was shown once again in what was then Czechoslovakia, during an aviation day held in Ostrava-Mošnov. Visitors could see the first aerial demonstration of this machine already in September of the following year during the international Farnborough Airshow in England.

After the cancellation of the development of the Buran space shuttle, unfortunately no use was found for such a large aircraft and therefore Mrija was shut down at Hostomel International Airport in 1994. This airport later became her home port until her destruction. In the same year, the construction of the second machine was also interrupted, and the work-in-progress remains were preserved at the factory of the Antonov company. In the years 2000-2001, the decommissioned aircraft underwent modifications that mainly concerned the strengthening of the floor, which increased its total weight to 640 tons. During these modifications, the machine was also upgraded with engines and electronics. Mrija took to the air, albeit only for a thirty-minute test flight, again on May 7, 2001.

Until 2022, it was part of the Antonov Airlines fleet and was used for commercial purposes. The first flight of this type took place in January 2002, when it carried 216,000 meals for American soldiers on 375 pallets. On June 16, 2004, the heaviest transported cargo was equipment for an oil pipeline weighing 247 tons, which the machine transported from Prague to Tashkent. During six of these commercial flights, she made a scheduled landing in the Czech Republic. Of these, three times at Václav Havel Airport in Prague (June 2003, June 16, 2004 and September 28-29, 2006) and three times in January 2015 at Leoš Janáček Airport in Ostrava-Mošnov for the purpose of transporting military equipment to Africa.

Due to the enormous interest in the use of this aircraft, the Antonov design office decided in 2006 that the construction of the second machine would be completed. It was supposed to take off already in the second half of 2008, unfortunately this decision was not implemented in the end. It was only in May 2011 that the Russian Ministry of Defense showed interest in this piece, and in August of the same year it requested specific information and conditions from the manufacturer under which the second An-225 could be completed and modernized. In June 2016, a report appeared on the Internet about the conclusion of the alleged cooperation between the Ukrainian company Antonov and the Chinese company Aerospace Industry Corporation of China, according to which the final completion of the second example should take place. In addition, the Chinese side (according to this speculative and apparently unconfirmed report) would like to use the second machine as a model for subsequent licensed production of this type of aircraft.

The tragic death of a magnificent giant

Unfortunately, the year 2022 turned out to be fatal for this beautiful and respectable machine in every way. During the first day of the war in Ukraine, when Russian paratroopers tried to create an air bridge for the occupying troops, Hostomel airport was the center of heavy fighting from the early hours of the morning. Unfortunately, at the time, the Mrija was in its hangar, along with other machines (An-22, An-26, An-28, An-74, An-124). Satellite images already showed on February 26 that the plane was damaged, but no one was sure of the extent. In the first days, there were heated discussions about how it was damaged and the theory of the destruction of the machine by a missile launched from a plane or a helicopter was worked on. Chief pilot Dmytro Antonov, who only managed to get to the bombed-out airport on March 31, claims, however, based on the type of damage, that this was not the case and that the Mrija and all the other machines were 99% destroyed on purpose only after the fighting by Russian soldiers. Most likely, this giant was destroyed by rockets from an RPG or grenades from an outboard grenade launcher from a distance of about 20 meters. 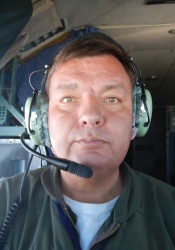 Soon after the destruction of the machine, the aviation community began to question why the management of the Antonov company did not take timely steps to save the aircraft from imminent destruction. Dmytro Antonov himself called him out for this carelessness in his video and pointed to a warning from the NATO Support and Procurement Organization (NSPA). On January 26, 2022, it recommended that the manufacturer move its aircraft fleet together with all personnel and equipment to Leipzig Airport in Germany. The proposal was prompted by fears of a war with Russia, which Western intelligence agencies and media have been warning Ukraine about for months. In addition, Mrija was able to land at the airport in Leipzig without any worries, as Antonov Airlines has its overseas branch Antonov Logistics SALIS, which provides strategic transport services for NATO.

Another question mark hanging over the question of why Mrija and the other machines were not saved was their technical condition. According to Dmytro Antonov, almost all aircraft (except for one An-124) were fully operational and ready for immediate take-off. Only on February 5, after the last flight, was one of the six D-18T engines removed from the aircraft to be installed on the waiting Ruslan. Starting on February 18th, the technicians were ready to put the engine back on the Mrija and bring it back to airworthy condition. The installation itself took place on February 23, and at 10 p.m. the machine was already ready to leave Hostomel. The airport itself was not closed on the eve of the war, as was the case at the airports in Dnieper, Zaporizhia and Kharkiv. Ruslan took off from there at midnight for a routine commercial flight. The company said in its statement that it was preparing everything to be able to move its entire fleet to the airport in Leipzig in the early hours of February 24. The reason why this did not happen, she explained, was the ban on the take-off of civilian aircraft (issued in view of the outbreak of war) and fear for the health and safety of her employees, who had been shot at by the occupiers since morning.

Given the extent of the destruction of the aircraft, the expert commission should at least find out whether it is possible to save at least three D-18T engines, which are fully compatible with An-124 machines, from the wreckage. Meanwhile, the state-owned defense company UkrOboronProm (overseeing Antonov’s manufacturer) issued a statement reviving the Mriji to airworthy status. According to this corporation, the total price could reach more than 3 billion dollars and work on it should last at least 5 years. However, whether this will be technically possible at all remains an unanswered question.