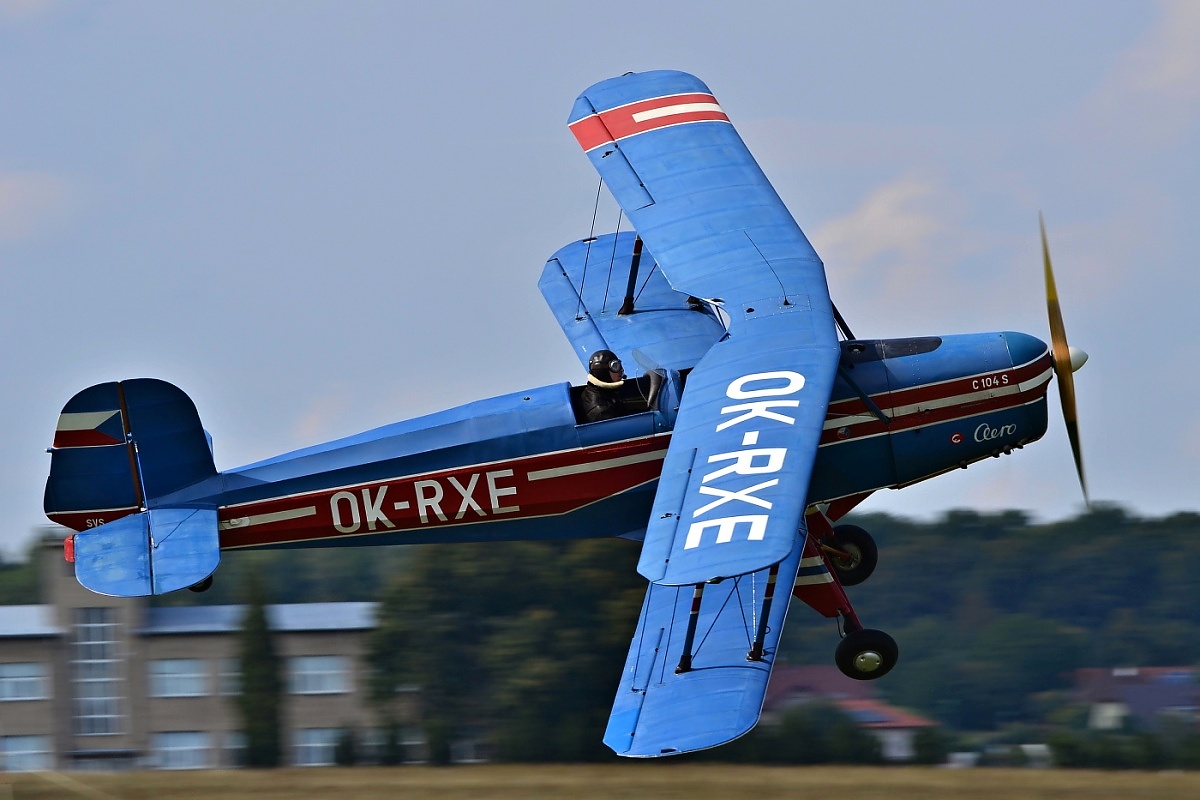 Bücker Bü-131 biplane trainer, who designed the designer of Swedish origin ing. Anders Johan Andersson. The robust, but fast machine, soon gained great popularity in many foreign countries, of which five were licensed. In a modern version of this beautiful machine, in the movie Ace es Jean-Paul Belmondo as adventurer Jo Cavalier rescue his little admirer of Jewish descent Simon Rosenblum and his entire family from the Nazis. In the 1990s, the Czechoslovak license version of the C-104S with the OK-RXE matriculation featuring the private aircraft of Gahlmayer appeared in several episodes of the Necklace series.

The prototype of the Bü-131V1 aircraft with the 59 kW Hirth HM 60 R was piloted by Joachim von Köppen for the first time on 27. May 1934, and in the same year the serial production of the Bü-131A began. The German Luftwaffe, following the year, took over the first few aircraft, which it then used as a training aircraft for basic pilot training. In 1936, the Bü-131B variant was also launched with a stronger 77 kW Hirth HM 504 A-2 engine. The machines were soon exported to many foreign countries such as Croatia, Italy, Yugoslavia or Lithuania. During the war, it was also licensed in Japan in two versions. The Army carries the designation of the Kokusai Ki-86 Cypress, while the Kyushu Maritime K9W. Both models had the same installed 81 kW Hatsuzake engine.

Czechoslovakia bought Ringhoffer-Tatra a.s. in 1935 and its chief engineer was Mr. Karel Tomáš. The next year in April, the chief engineer Vojtěch Matěna passed the model machine Bü-131A-2. The dragon of the aircraft was produced in the Moravian-Silesian road a.s. (later MSV Metal Studénka a.s.), engines of Ringhoffer-Tatra Kopřivnice. The aircraft was named Tatra T-131, unfortunately, the company managed to produce only the first ten pieces by 1937. In the end, only 35 pieces were produced and the next production was transferred to the Aero factory in Prague in the spring of 1939, where they were manufactured for the German Luftwaffe under the original designation Bücker Bü-131 D-2.

After the end of World War II, the production continued with a 10-speed series with the original Hirt HM 504 engine, already labeled as Aero C-4. However, it was soon replaced by the C-104 version with a 77.3 kW Walter Minor 4-III engine, which was produced in Czechoslovakia until 1949 and produced 260 pieces. For the growing popularity of non-powered flying, it was decided to use (as necessary) the biplane as a towing machine. In 1950, therefore, the Leton Air Institute of Aerospace began testing a modified airplane with a metallic, ground-adjustable Walter propeller and towed gear. For better cooling of the fully loaded engine, additional air traps were added to the bonnet and the oil cooler was installed on the left side of the engine cover for this type.

Pilots from the Czechoslovak Svazarm have achieved several national and international records in the FAI C1a category on these machines. A record height of 5 655 m managed to reach Helena Rumler with this plane, when 17. June 1960 started at Jihlava airport. The three-kilometer track near Brno Airport flew 7. October MUDr. Jiří Stoklasa with an average speed of 171 km/h and three days later reached the 185 km/h on the twenty-kilometer track Podolí u Brna – Vyškov. In the next two days, he reached a record speed of 194 km/h on a three-kilometer track. For further planned record-breaking, the aircraft was fully relieved and a new 103 kW M-332 engine was installed. Pilots Karel Jareš and Eva Leigner with him on 11. September 1961 reached the same speed of 216 km/h on the 3, 15 and 20 km lines. Two days later Jareš created a new national record when he reached the height of 6 340 m above Panenský Týnec. For two more days his performance improved by reaching 7 190 m. With the same machine, Leigner set another record on 5. October this time on closed track 100 km when it reached an average speed of 207 km/h.

In 1962, this type of machine was also adapted by instructor of the Central Sailing School of Svazarm in Vrchlabí and sport master Karel Valášek for a record flight on a closed track. With the help of Ladislav Vobořil, they carried out the overall relief of the airplane and a number of modifications. The front pilot area was covered and the rear covered with a cover. The record flight took place on 19. October 1962, when Valášek crossed the triangular track Vrchlabí – Hodkovice – Jičín five times at 3 h 21 min 55 with an average speed of 150 km/h.

In Spain, CASA’s licensing continued until the beginning of 1960. It served as a training aircraft for the Spanish Air Force until 1968. About 75 units were produced by the Swiss company Dornier Werke A.G. in Altenrheim. In the 1960s and early 1970s, the governments of the two countries already decided to sell their license versions to private owners, many of whom were exported to the United States. Many of them were equipped with a modern engine Lycoming O-320 with a power of 111,8 kW or a stronger O-360 (134,2 kW), with the opposite fuel and oil injection into systems suitable for aerobatic flights. The company CASA produced in 1994 again briefly and renamed the machines as BP-131. In the same year, production in Poland by SSH Janusz Karasiewicz was launched on the basis of Czech plans.