Ilyushin Il-14 was a twin-engine multi-purpose aircraft, manufactured as a successor to the older type of Il-12 and then very widespread Douglas DC-3 machines (including their licensed versions Lisunov Li-2). In the mid-fifties of the last century, these machines began to be produced under license in the then Czechoslovakia and a smaller part in the German Democratic Republic. At the same time, these aircraft also became the backbone of the CSA fleet. He played this machine twice in the film, first in the film comedy Sir, You Are a Widow from 1970 and three years later also in the agitation film The High Blue Wall. In both cases, a licensed version of the Avia Av-14 appeared in the film. 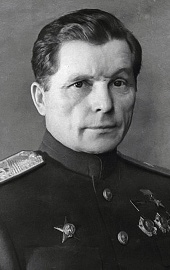 Sergei Vladimirovich Ilyushin’s design office began working on this follower of Il-12 in 1949. In essence, it was an almost complete modernization of the already mentioned previous type, in which only the original fuselage was preserved. The wing underwent a change, which now had a smaller bearing area, a different floor plan and an internal structure. This change also affected the vertical tail surfaces. Furthermore, the machine received new instrumentation and installation and the enlarged fuel tanks were moved from the centerplane to the outer parts of the wing. Thanks to these innovations, the entire airframe acquired a slightly more aerodynamic shape. In the end, the aircraft also received more powerful engines Švecov AŠ-82 T equipped with Czechoslovak propellers Avia AV-50. The first prototype piloted by Vladimir and Konstantin Kokkinaki took off from the airport of the Moscow plant Znamaya Truda on September 20, 1950. The test tests then took place in 1950-52 under different flight and climatic conditions.

After the completion of state tests in 1953, it began mass production under the designation Il-14P (Passažirskij), while its production also participated in the production plant in Kazan. It was designed primarily for short distances (it was first deployed on Aeroflot lines on November 30, 1954), so it had passenger seats arranged in six rows of three next to each other and could therefore carry only 18 passengers at a time. It is therefore not surprising that it was also a model for the saloon version of the Il-14S, which was used to transport important personalities. Subsequently, the production version was also included in the transport version of the Il-14T, designed for the Soviet Air Force. It was characterized by large cargo doors with a built-in pulley crane on the left side of the fuselage, located behind the wings. The airborne variant of the Il-14D (Desantnyj) was also derived from it, which had folding benches placed along the walls of the cargo space.

By extending the fuselage by 1 m, a variant of the Il-14M for 24 passengers was created in 1955. The interior seats were arranged in six rows, two on each side and an aisle in the middle. The following year, a new type (Il-14M-32) was developed for 32 passengers, which soon replaced the previous type (Il-14M-24) on production lines. Later, Aeroflot’s workshops managed to increase this capacity to 36 seats. At that time, the older Il-14P was being converted to a larger seating capacity, mostly for 28 people, or to a purely cargo version of the Il-14G (Gruzovoj).

In 1955, eight Il-14P version aircraft arrived in Czechoslovakia from the Tashkent Air Race No. 84 V. P. Čkalov to Czechoslovakia. It is interesting that the first of them was the only one adapted into a salon variant and donated for the 45th birthday to the then Minister of Defense A. Čepička. This “gift” from Marshal R. J. Malinovsky had at that time a luxuriously equipped interior divided into two lounges (red and green), which were equipped with furniture made of polished Caucasian walnut. The remaining seven aircraft were the basic transport version with seats for 18 passengers. The second of these seven machines (with the military registration V-17) was handed over together with the production documents as a model piece to Avia in Letňany, Prague, thanks to which the licensed production of these transport aircraft could begin the same year.

The first manufactured aircraft thus left the factory gates the following year in the summer and was subsequently flown by pilots Petr Široký and Václav Martínek on 14 August. Tests of this machine, which initially bore the military registration of the V-18, began at the Research Testing and Aviation Institute (VZLÚ) until September 4 and lasted until December 20 of the same year. From October, the original Il-14P (with the already mentioned V-17 registration), which flew at VZLÚ until the end of the V-18 tests, joined it as a comparison machine as part of the tests. The second piece produced took off for the first time on September 11 of the same year and was subsequently sent to the USSR for tests. After the examinations ended on May 9, 1957, he returned to Czechoslovakia. The third aircraft first got into the air on September 27 and was then handed over to the Czechoslovak Air Force, as well as three other manufactured specimens. Later, the production of a contract for 22 aircraft for the USSR began, which lasted until the first half of 1957.

Avie in the service of CSA

The first five machines were acquired by CSA in 1957, and it was already an improved model Av-14-24 with a modified interior for 22 to 24 people and an increased take-off weight. These aircraft were later gradually put into live operation from the first half of June of the same year. Of little interest is that the first of them with the matriculation OK-LCA then statically appeared at the 22nd Paris Air Show Le Burget. Less than a year after this first delivery, more precisely on May 8, 1958, CSA received additional copies, but this time it was an Av-14-32 version with an extended fuselage for 32 people. Another feature of this model was the fully reconstructed interior, including instrumentation and electrical equipment. Soon after, production began for a type for 40 passengers, which was named Av-14-40 or Av-14-32A. One of these machines (OK-MCI) can still be seen in the Kbely Aviation Museum, where it was officially returned from the hands of VTÚL and PVO employees after more than a year of renovation (you can read more about this event here).

CSA soon applied this more economical way of arranging seats (in ten rows of four next to each other and an aisle in the middle) to all previous thirty-two-seater aircraft in its fleet. The last copies were obtained by CSA in 1975, they were three discarded saloon models Av-14S from the government squadron. Unfortunately, this year was also marked by the last international flight (January 6, 1975) of these machines in CSA colors. The last domestic flight (March 31, 1977) and the definitive decommissioning of these machines at CSA followed a few years later. Czechoslovak Airlines then sold some machines to the Soviet Union, where they then flew in the colors of the Polar Air Force. From the beginning of commissioning until its completion (1957-77), a total of 32 Av-14 aircraft served at CSA.

The Av-14 Super variant was created thanks to a significant modification of the previous type (Av-14-32). He managed to increase his take-off weight, but also to reduce his empty weight. It was produced in three interior modifications. It was a 42-seat arrangement for short domestic routes, 36-seat for short international flights and 32-seat for medium-long international routes. The end wings of all three modifications were identically fitted with slender cigar-shaped cases with fuel tanks. Furthermore, all side square windows, except for the first pair, were replaced by newer round ones. The prototype first took off in 1959. The Av-14 Super-36 version, however, served not only in our country but also abroad. Its operators were, for example, the Bulgarian company TABSO, the Guinean Air Guinée and Aeroflot. Several pieces were also delivered to Mongolia.

From 1957, the Avia also began to develop a transport version of the Av-14T for the Czechoslovak Air Force, which was completed in October 1958. After the end of factory tests, the CSLA gradually began (1958-60) to take over a total of 36 ordered pieces. Even at ČSLA, however, several machines ended their careers with accidents. The first is an aircraft with serial number 013149, which served in the 46th Bomber Air Division. He crashed into the terrain of the Litenčická Uplands on March 30, 1960, after the crew probably misjudged the height due to poor visibility. Seven crew members then fell victim to the accident. This machine was soon replaced by an aircraft with serial number 013167, but the same fate did not escape. Although it served here without accidents and was later handed over to CSA, where with the registration of OK-OCA it served as a postal and freight. However, only until the fateful day of the accident at Bratislava Airport. At that time, the pilots did not follow the prescribed flight path and altitude due to bad weather and crashed the aircraft 1,800 meters from runway 22. Unfortunately, none of the crew survived this tragedy. The last recorded case was an aircraft with serial number 013148, which crashed into the ground near the village of Hůrka near Nový Jičín on 22 August 1964 during a flight from Přerov to Mošnov. Eleven people fell victim to the disaster.

Avia also managed to export some Av-14Ts abroad. By 1960, the Soviet Union had acquired 11 aircraft, Mongolia one and Guinea. The last mentioned machine used under the matriculation 3X-BKE (then changed to 3X-GAF) was the last copy of this variant produced in the Avia plant in Letňany. It is also interesting that he returned to his homeland in the mid-1960s and was included in the services of ČSLA as 3173.

In 1966, the Czechoslovak Air Force ordered at the Aero Vodochody plant the conversion of a total of nine standard machines to a type intended for aerial photography. This model, known as the Avia Av-14FG, had a significantly expanded and richly glazed tip of the fuselage in which the cabin for the navigator was located. It was possible to get into it through a narrow tunnel stretching along the right side, the entrance to which was behind the co-pilot’s back. This intervention in the structure fundamentally changed the center of gravity of the entire aircraft and therefore it was necessary to build into the tail of the counterweight in the form of cast iron plates weighing 400 to 600 kg. Instead of the original interior (up to three original seats), two workplaces of camera operators were installed in these areas, a darkroom where it was possible to develop images and an oxygen system designed for flights at altitudes above 5000 m. on the port side in front of the three already mentioned tandem seats.

The windows of the two aerial cameras were located in the belly of the airframe, slightly to the right of its longitudinal axis. The other three were prepared for Soviet-made AFA-BAF-40P cameras designed for oblique side shooting. The first was located on the left side of the bow under the first square window, the second was installed in the lower part of the entrance door (on the right side) and the third had its place on the left side of the rear of the fuselage exactly opposite the entrance. The space in the floor mounts was then reserved for measuring cameras of the LMK-2000 type made in East Germany. Obsolete but reliable Swiss Wild RC-10 cameras were also used for some tasks.