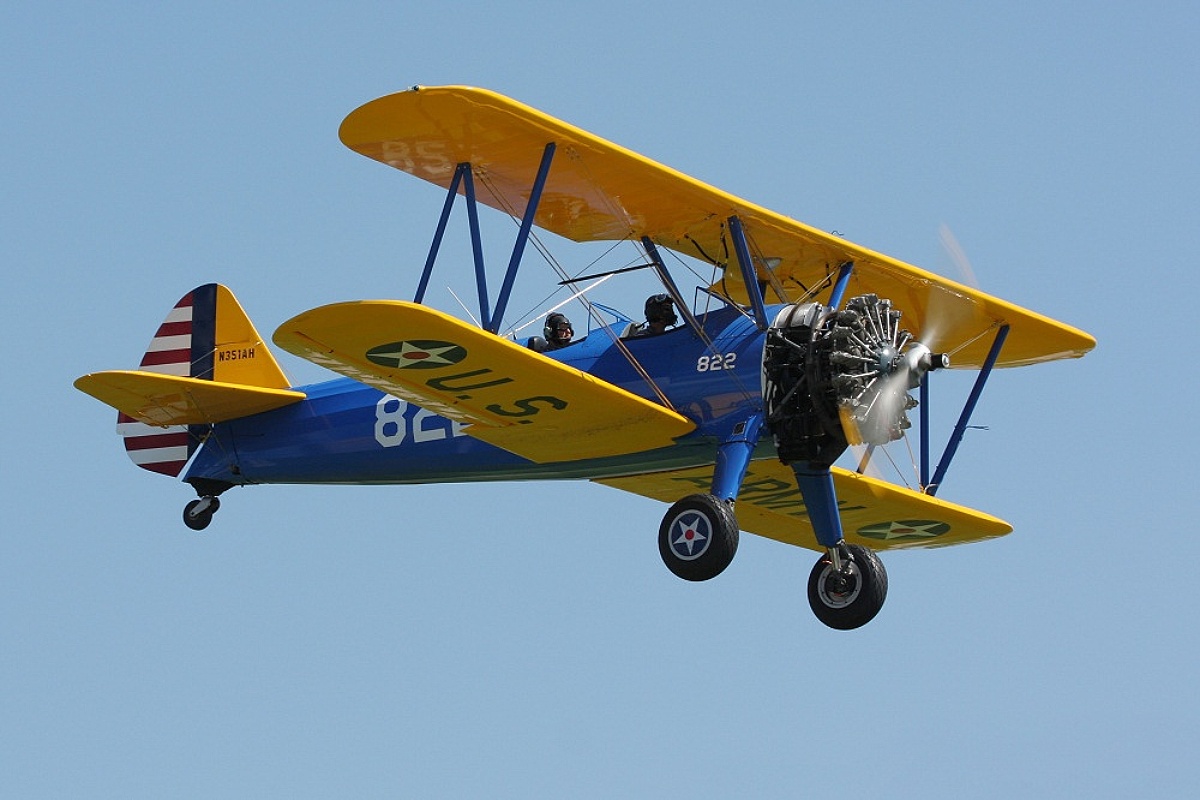 Boeing Stearman PT-17 Kaydet also known as Model 75 is a rugged biplane with fixed landing gear, made usually with exposed radial engine. PT (Primary Trainer) hides the original purpose for which the machine served with the USAAF, US NAVY and RCAF throughout World War II. This plane can also be seen in several films, among them the most famous ones are the North-West North Point, Pilot’s Return, or the well-known comedy Two Mourners between Heaven and Hell.

The prototype, marked as Model 70, was completed by Stearman Aircraft in 1933. USAAC did not close this time, but 61 modified Model 73 models were supplied by the US Navy. For the US Navy, these machines received the NS-1. In September 1934, the United Aircraft and Transport Corporation was required by the Competition Act to separate its airlines from the aircraft manufacturers. At that time, Boeing became a separate company again, and Stearman Aircraft was its subsidiary. On the basis of many export successes, the A73L3 model ended in 1936 with the ultimate training model 75. In the same year a prototype registered for civilian use took off and was awarded the ATC 743 certificate.

In the same year, the most popular model A75N1, which differed from the PT-13 by incorporating the seven-cylinder Continental R-670-4 or R-670-5 starter engine and the necessary changes in the installations. The USAAC ordered a total of 2,942 machines whose deliveries ended in January 1943. The first variant was the PT-17, which began PT-17A night treatment and later a special powder version PT-17B and C. For the US Navy was delivered to 250 aircraft N2S-1 and 455 N2S-4. In addition, the N2S-2 version with the Lycoming R-680-8 engine and approximately 2000 N2S-3 with the later R-670-4. RCAF has ordered 300 D75N1 models in winter gear that has been rewrote to Kaydet Mk.1. For administrative reasons, the USAAF PT-27 was also assigned to the exporting aircraft.

Later, there were 150 PT-18 and PT-18A (model A75J1) with a Jacobs R-755-7 engine of 165 kW. The latest Serial Type for the USAF was the E75 with a 165 kW Lycoming R-680-17 engine, derived from the PT-17C and designated PT-13D. The aircraft was delivered 855 pieces, the Navy then 873 as N2S-5. The production was completed in February 1945 and until then, 8,544 aircraft had been built on Boeing’s subsidiary site. After the war, thousands of surplus machines were sold to civilian owners, who are mostly used as powdering aircraft. These planes had a patch for pesticides or fertilizers that were mostly mounted in the front cockpit, and the original seven-cylinder engine was replaced with the larger Pratt & Whitney R-985 engine.

However, they have also found their use for recreational, sporting and aerobatic flying (including “walking on the wings”). One example is the Red Baron Stearman acrobatic group, which was set up in 1979 to promote Red Baron Pizza products. It was composed of five machines equipped with modified motors of about 335 kW. In particular, the engines were shown to be boned compared to the standard version. They served as a base for Minnesota Regional Airport (KMML), which was later established by an air museum named after this aircraft. Although it was officially the oldest aerial acrobatic group in 1993, it was performing until 2007.