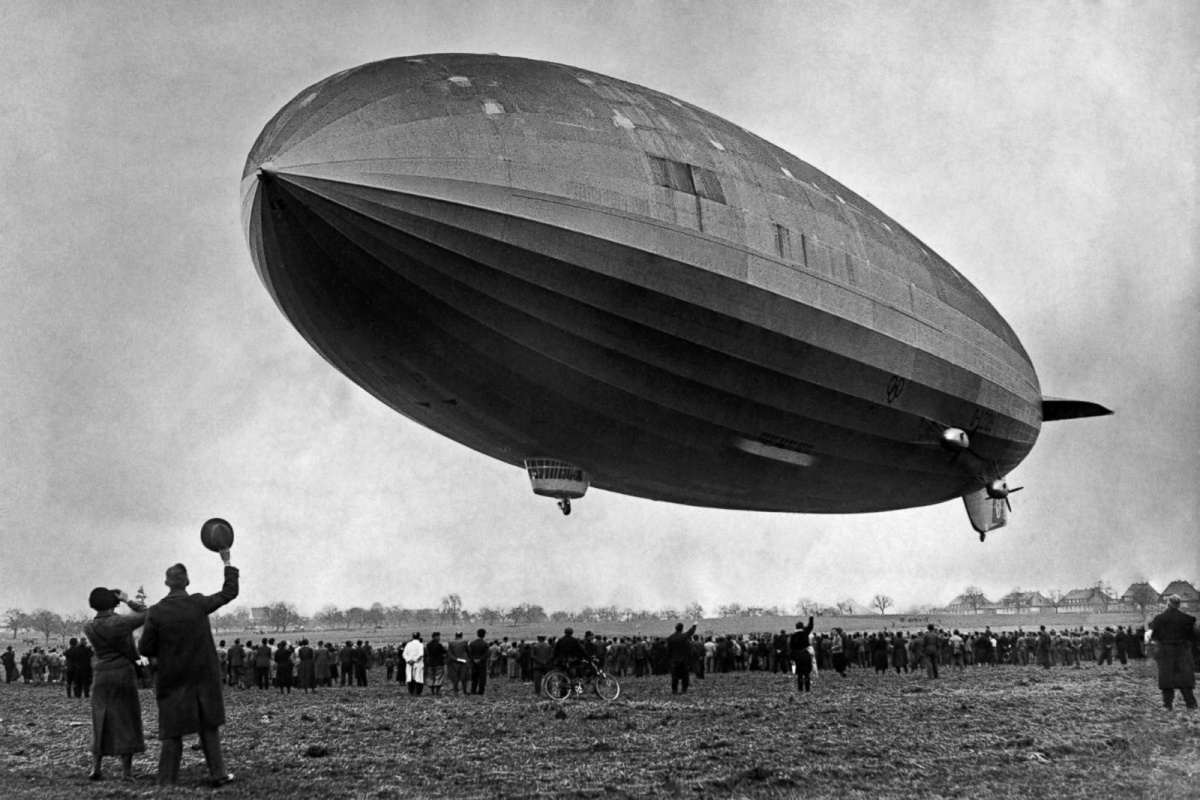 LZ 129 Hindenburg is for its tragic fate, still the most famous airship of a solid structure of all time. The machine was named after the Field Marshal and later by the second German President, Paul von Hindenburg, who was elected in 1930 by the then director of Luftschiffbau Zeppelin GmbH Dr. Hugo Eckener. This flagship of the German airline Deutsche Zeppelin Reederei (DZR) has been in service until the day of the plane crash just about 14 months. The catastrophic story of this aerostat also describes two films, the 1975 American film Hindenburg and the 2011 German version of Hindenburg: Last Year.

The skeleton of this machine was made of duralumin and consisted of 15 main annular bulkheads, which were interconnected by longitudinal beams located around their circumference. 5 tons of the alloy already saved from the debris of the British experimental airship R101 were used to build the components. Inside the structure were 16 independent cotton gas bags. In their production, a new technology for the application of several layers of gelatin latex was used to improve gas-tightness. The outer cotton coating of the ship was impermeable to impregnated with a mixture of iron oxide and cellulose acetate and ultimately coated with aluminum powder to prevent overheating of the container. The entire aerostat was powered by four Mercedes Benz DB 602 (LOF-6) diesel engines, each of 890 kW. 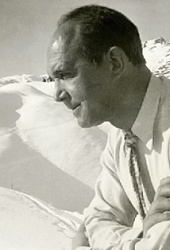 Hindenburg could carry up to 72 passengers, 61 crew members and cargo, with small cars being transported in the back of the cargo compartment (at the rear). In total, this meant 112 tons of payload of the machine. To improve the aerodynamic characteristics, all passenger compartments were placed inside the machine, not in the classical underlying gondolas. In its time, the extremely luxurious and spacious interior was designed by the famous German architect Fritz August Breuhaus, who previously worked for example for the American company Pullman Car Company.

In the middle of the upper deck, small cabins, lined with large communal rooms (dining room, lounge, and writing room on the starboard) with a promenade, were prepared for the passengers. In the dining room hung pictures with various scenes of LZ 127 Zeppelin airships to South America, and the wall of the lounge covered a stylized map of the world. As passengers were expected to spend most of their time in public areas, there were large sloping windows located along the entire length of the two decks. In the lower deck were showers with hot and cold water, a crew canteen and a smoking lounge. 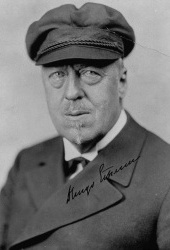 The first test flight of a machine that did not even have its name on its hull at that time was on 4. March 1936. The flight was attended by the head of Dr. Hugo Eckener, Lieutenant Colonel Joachim Breithaupt, American engineer Harold G. Dick, eight company captains, 30 shipyard staff and 47 other crew members. The first commercial and postal flight took place on 23 March of the same year. The ship sailed from Friedrichshafen to Löwenthal via Lake Constance and carried 80 reporters. Three months later Hindenburg made a record transatlantic flight lasting only 5 days, 19 hours and 51 minutes.

At the turn of 1936 to 37 there were several changes in the ship’s design. Thanks to the increased lift capacity, it was possible to add another ten cabin for passengers. Nine of them were equipped with two beds, the last of which was four. Thanks to these improvements, the total capacity of the passengers rose to 72. On the outer shell of the airship, rainwater drainage troughs were also installed in the ballast tanks used to compensate the weight of the airship.

Hydrogen instead of helium

Originally, it was intended to use less flammable helium for this aerostat, which at that time was considered the safest lifting gas. Unfortunately, it was also quite rare and extremely expensive at that time, since it could only be bought in industrial quantities from distilleries on some oil fields in the United States. However, the main reason why helium was eventually used was a military embargo that had been imposed on this gas as early as 1927. Although German engineers initially hoped that the National Council for Ammunition Control would be able to convince them they would eventually be forced to use cheap hydrogen. One of the few advantages of this gas was about 10% greater lift than helium and therefore other passenger compartments could be added. Since the Germans had considerable experience in the construction and operation of hydrogen-filled airships, various security features were installed in the airship to prevent fire in the event of gas leakage.

The breakdown in Lakehurst

Hindenburg started his last flight on May 3, 1937 from the airport in Frankfurt. It was supposed to be the first of the eighteen planned transatlantic flights. During the flight over the ocean, the ship gained a delay due to a windscreen, which was further compounded by the storm over New Jersey. Because of this unfavorable weather, the airship had to double the city twice and therefore arrived at the Lakehurst airport until May 6th, twelve hours later than originally planned. The landing maneuver began at seven o’clock, with ground personnel starting to catch the boat exactly twenty minutes later.

The fateful moment occurred just four minutes later. The aerostat was only about 60 meters high when a dreadful fire sprang up in the back. He then swallows it in a very short time (just 34 seconds). On board were 36 passengers and 61 crew members. More than a third of the passengers (13) and airship staff (22), including one land-based worker, came to life.

The unwanted publicity of this disaster was largely helped by the unusually large participation of reporters. Paradoxically, thanks to this, there are a large number of photographs, a movie recording, and the most famous radio record in radio history, commented by Herbert Oglevee Morrison.

Despite the large number of theories of the causes of the Hindenburg disaster, these three of them probably most seem to be true.

The first and probably the least likely one is the sabotage promoted by Zeppelin’s representatives, especially its former chairman, Hugo Eckener. Given that these airships were then considered to be a symbol of the power of Nazi Germany, they could also be an attractive target for opponents and opponents of this far-right party. This version also reported that the fire was in the middle of the rear of the airship, far from the anchor ropes. During the investigation, however, this evidence was not proved by any factual evidence.

It is probably the most probable theory today that calculates the spark of static electricity. This is also reflected in the fact that the aerostat was not designed so that the electrical charge could be discharged harmlessly. The problem was mainly in wet anchor ropes. Although they were made of ramie so as to be non-conductive, it has changed fundamentally after the already mentioned storm front. The friction of the ropes on the surface shell created an uncharted electrical charge on it. As soon as the rope touched the earth, the entire aluminum frame grounded, causing the discharging of the discharge and subsequent fire. Witnesses of the event later declared that around the airship there was a flute similar to the fire of St. Elias.

The latest version, for which the prominent US Airborne Disaster Investigator Greg Feith is a supporter, points to the unusually sharp turnaround of Hindenburg. The instructions with which the crew was thoroughly acquainted demanded that the ship avoid such abrupt changes of direction because of the overload of its relatively fragile construction at the rear. It is assumed that during the rotation there was a rupture of one of the skeletal stiffeners, which in the case of a backlash broke through one of the stern compartments and thus caused a critical leakage of hydrogen. The gas was then ignited by skipping the static discharge in the same way as described in the previous theory.

This would be evidenced not only by many eyewitness testimonies or film footage, but also by balancing problems during the final phase of the landing maneuver. The unexpected weight of the rear has forced the crew not only to release all the ballast tanks on the stern, but even to move the crew members from the rear to the bow to compensate for the disturbed balance of the ship. It is also questionable what kind of substance has actually been ignited. In addition to hydrogen itself, there is also a thesis that a cover containing flammable substances, especially the coating, could be ignited. This is also evidenced by the orange flame recorded on the film, hydrogen, on the other hand, burns with a colorless flame.

End of Zeppelins and LZ 130

Airborne accidents occurred long before Hindenburg burned, but no more serious was the Zeppelin machine. These ships have long managed to keep a record of air traffic safety. For example, the LZ 127 Graf Zeppelin, which transported 12,000 passengers and flew over 1.6 million kilometers, proved very successful. The company was proud of this fact, and it also always emphasized that only one passenger had been injured on its airships.

However, the tragedy has changed completely, and the last cluster of clutches of this type of air transport has just been put in place by the media that were in the place of misfortune. They managed to completely destroy the public’s confidence in these luxurious flying giants, which meant for the company essentially the complete end of its activities. In addition, the operation of the business reflected the ever-increasing influence of the Nazis, and the Second World War was falling.

The company, even after roughly a year after the catastrophe, managed to build another LZ 130 Graf Zeppelin II, but never carried a civilian on board. The machine was designed only for propaganda and spy flights, which he eventually made in total only 30. By the outbreak of World War II, the last hope for the resurrection of the company had faded completely. The material was needed to build military aircraft, and in 1940 Hermann Göring was ordered to destroy all the remaining Zeppelins.