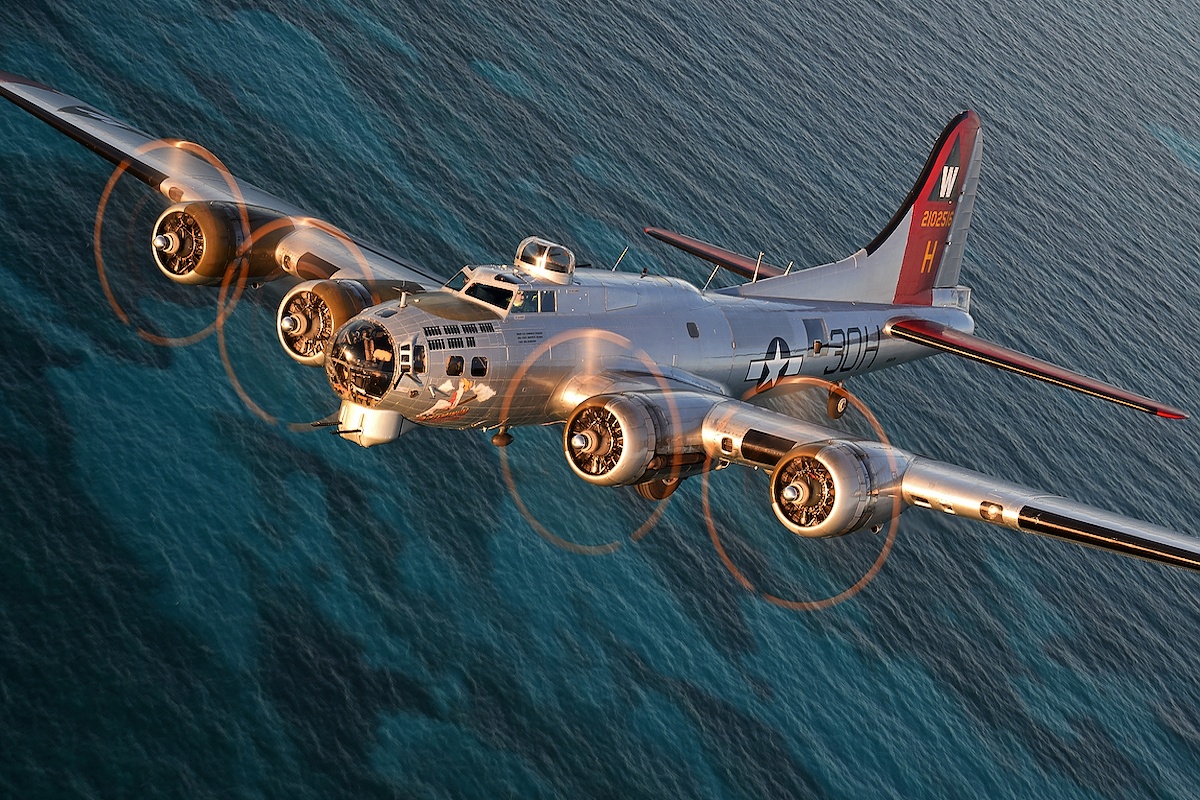 Boeing B-17 Flying Fortress is a heavy-duty four-stroke long range bomber, used by the Americans and the British RAF during World War II, primarily for daily raids over occupied Europe. During the Slovak National Uprising, several of these aircraft landed with US military missions and cargoes of weapons at Tri Duby airport. This documentary film, titled Men of the B-17, recorded in 1991, tells of this historic event. Often we can meet this machine in foreign war films, among which the most well-known are Memphis Belle or Tora! Tora! Tora !. However, we can see it, for example, in the Czech film Dark Blue World.

The US Army Air Corps announced on 8. August 1934, a new heavy bomber competition to replace the obsolete Martin B-10. The final selection decision was to fall in Wright Field, Ohio. Douglas and Martin joined Douglas and Martin Douglas DB-1 and Martin 146. The decisive requirements of the USAAC on the airplane included, in particular, the availability of a full-load bomb, range, maximum speed and endurance at least 4 hours at a speed of 320 km/h. 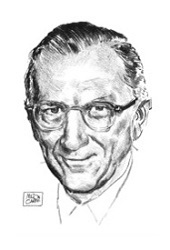 The prototype of the model 299, later redesigned on the XB-17, built the company at its own expense, and a design team led by Edward Curtis Wells and E. Gifford Emery contributed to its creation. The development was based on the Boeing XB-15 experimental bomber and the Boeing 247 transport aircraft, with the model aircraft combining their best features. It was driven by four Pratt & Whitney R-1690-E Hornet engines, each with a power of 600 kW. He could carry 2 200 kg of bombs in the bomber behind the cabin, and his defense consisted of a total of 5 Browning 7,7 mm machine guns. After the first test flight on 28. July 1935, journalist Richard Williams was surveyed by the magazine, and the number of defensive machine guns made him so amazed that he engineered the name Flying Fortress.

Boeing also initially claimed in his press reports that Model 299 is the first combat aircraft capable of continuing the mission even if one of the engines failed. At a presentation held on 20. August that year in Wright Field, the machine from his Seattle home airport flew in 9 hours and 3 minutes, much earlier than other competitors. The army was so enthusiastic about the performance of the new machine that it ordered 65 machines before the end of the competition. The 30th October crash that killed two test pilots, however, quickly changed her mind, the order was canceled, and instead asked for the production of the 133 Douglas B-18 Bolo machines. On 17. January 1936, the Air Force finally decided to order a test series of 13 Y1B-17 machines. In addition to many significant changes to the design, the Wright R-1820-39 Cyclone also included the installation of more powerful engines.

The machine with the serial number 37-369, originally built only for ground kite testing, was later modified into a workable condition. However, due to the problems with the turbochargers, it took off for the first time until 29. April 1938 and at the beginning of 1939, the work on its innovations was definitely over. The army took over and became active on 31. January 1939 under the name B-17A. In June 1939, the first B-17B took off for the first time and was equipped with a Norden gas gauge with a gyroscopic stabilization system. The B-17C variant had a shooting point in the elongated projection below the fuselage, self-locking fuel tanks, and more powerful Wright GR-1820-65 Cyclone engines, each with a power output of 883 kW, were installed in engine gondolas. With the B-17C, three drop-shaped shotguns with limited range changed into two window openings, and a gondola machine gun on the belly of the machine, which was structurally very similar to a tower installed on German Heinkel He-111P.

When building the B-17E, the engineers made extensive revision of the original prototype, which made a great deal of modifications and innovations. The fuselage was extended by 3 m, overall the tail area increased significantly, and in addition, the crew’s armor was refined. The airplane received three new electrically operated Sperry towers with double guns. The first one was placed on the airplane’s rim just behind the pilot’s cab, the other on the stomach just below the ball turret, and the latter was installed in the tail. The ventral tower was dropped in case of a chassis failure so the machine could land on the stomach. However, the tower installation has caused a 20% increase in the weight of the airplane and hence it was necessary to mount even more powerful versions of the Wright R-1820-65 Cyclone engines with turbochargers, each with a power of 882 kW. Another two gunshots (each one machine gun) were in the window openings on both sides of the hull behind the wings. One moving machine gun was under the dorsal force in his cabin also a radio and the same two weapons were in the bow of the hull in the articulated hinges. The first takeover of the E model took place on 5. September 1941, and it was the first type targeted primarily at the attack.

Shortly after engaging in combat operations, there were several specific modifications, which improved both active and passive defense. The nose of the aircraft gained an improved form of bombardier and navigator made of one piece of plexiglass that was almost without a steel skeleton. Behind him, one machine gun was added to both sides of the bow, and later were added a third placed above the Norden bomb sight. The radar gun was replaced by a more efficient 12.7 mm caliber weapon and the armor protection expanded to 27 parts. Subsequently, these modifications were already part of a new type of B-17F, the prototype bearing the XB-17F for the first time flew on 30. May 1941. This version was the primary aircraft of the 8th Air Force, which used it in daily raids on German targets in 1943.

Boeing also worked with Vega on two refined aircraft known as XB-38 and YB-40. In case of a lack of Wright engines, the XB-38 was tested with water-cooled Allison V-1710-89 engines at 1055 kW but due to the June prototype accident and the need for engines in other projects was dropped from this version. Approximately 20 pieces of the YB-40 modification were to be used for this purpose before the escorts were introduced. Four training planes called the TB-40 were also built for training. The machine had another tower added to its back, a bomber converted to ammunition depot and reinforced armor, making the weight of the machine more than 4 000 kg. So it was often that the overloaded machine was not enough to hold the formation, especially after the standard airplanes tossed the cargo of bombs.

In July 1943, the B-17G was based on the previous type F. Innovations in this type were mainly the remote-controlled bow (so-called “beard”) tower. Additionally, the position of the shooters was adjusted so that they did not interfere with each other and the newly shorter tail was equipped with a reflective sight. Various variants E and G, referred to as XC-108 to XC-108B, were later used to transport people or cargo. Interestingly, one of them used Douglas MacArthur as his personal airplane. Based on the US Army’s demands, different versions were designed for specific purposes. F-9 to F-9C for photographic reconnaissance, PB-1 for marine survey and between 1943-48 and B-17H for marine rescue service. The last mentioned was the ASV radar and under the hull a suspended boat. The production of flying fortresses was finally terminated at Boeing on 13. April 1945, and a few months later, more precisely on 29. July, and at Lockheed-Vega.

After the war, some aircraft were modified as unmanned, remote-controlled flying targets, renamed DB-17P, QB-17L and QB-17N. Additionally, there were 31 PB-1W anti-submarine aircraft equipped with a large radiolocator, and for the purposes of the Coast Guard Service, 17 pieces bearing the PB-1G label were rebuilt. Later, the Model 299-Z Test Drive was built to test turboprop engines and a luxury civilian airliner renamed Model 299-AB used by TWA. 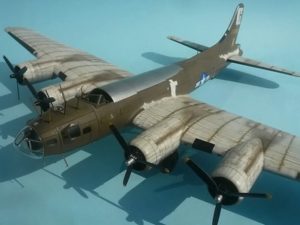 At the end of the war, roughly 25 B-17Fs were rebuilt to BP-7 Aphrodite unmanned bomber. It was equipped with a radio controller, two television cameras, a shock head, and about 9 000 kg of explosive Torpex explosive. For the take-off and initial climb, however, there was still a need for a live two-man crew. In order to facilitate the evacuation, the cockpit and the space of the upper shooter were removed and an open cabin with a windscreen was mounted instead. After reaching the flight level, the pilot was directed to the destination, then the engineer turned on the remote control and activated the charge. After the two had succeeded in leaving, the CQ-4 companion crew took control of the machine, which was modified for these purposes and monitored the whole course of the flight using the cameras mentioned above. The first one picked up the dashboard and the other in the bow and pointed obliquely down the track of the flight. As soon as the unmanned machine got close enough, its control was locked and the mother plane fled back to the base.

The project was approved and assigned to the 388th Bombing Group at the RAF Fersfield Airport on 26. June 1944. For the first time, these unmanned airplanes were deployed on 4. August 1944, and their goal was the Siracourt bunker in the north of France, hiding the launch ramps of German V-1 missiles. Unfortunately, one of them got out of control shortly after taking off, crashing near the village of Orford and destroying 2 hectares of trees. The other continued successfully, but the clouds prevented the cameras from precisely determining its location, and therefore it eventually flew 150 meters. During the next mission, the first of two radio-controlled flying bombs had a malfunction just before it hit the target and was shot down by a defensive fire flame. The other one then missed him 450 meters.

The US Navy is more or less successfully used on several other missions, unfortunately one of them died by Joseph Patrick Kennedy Jr. due to the explosion of the uncontrollable BQ-7 in a crash with the parent aircraft Consolidated PB4Y-1 Privateer over the mouth of the Blyth River. The last attempt to use these predecessors of today’s military drones on 20. January 1945 became a mission to destroy the Oldenburg power plant. Unfortunately, both flying bombs flew for several kilometers, and the USAAF ended this program as unrealistic. The truth, however, was that in 1944 the designers simply did not have the necessary technology to meet the requirements of the project.