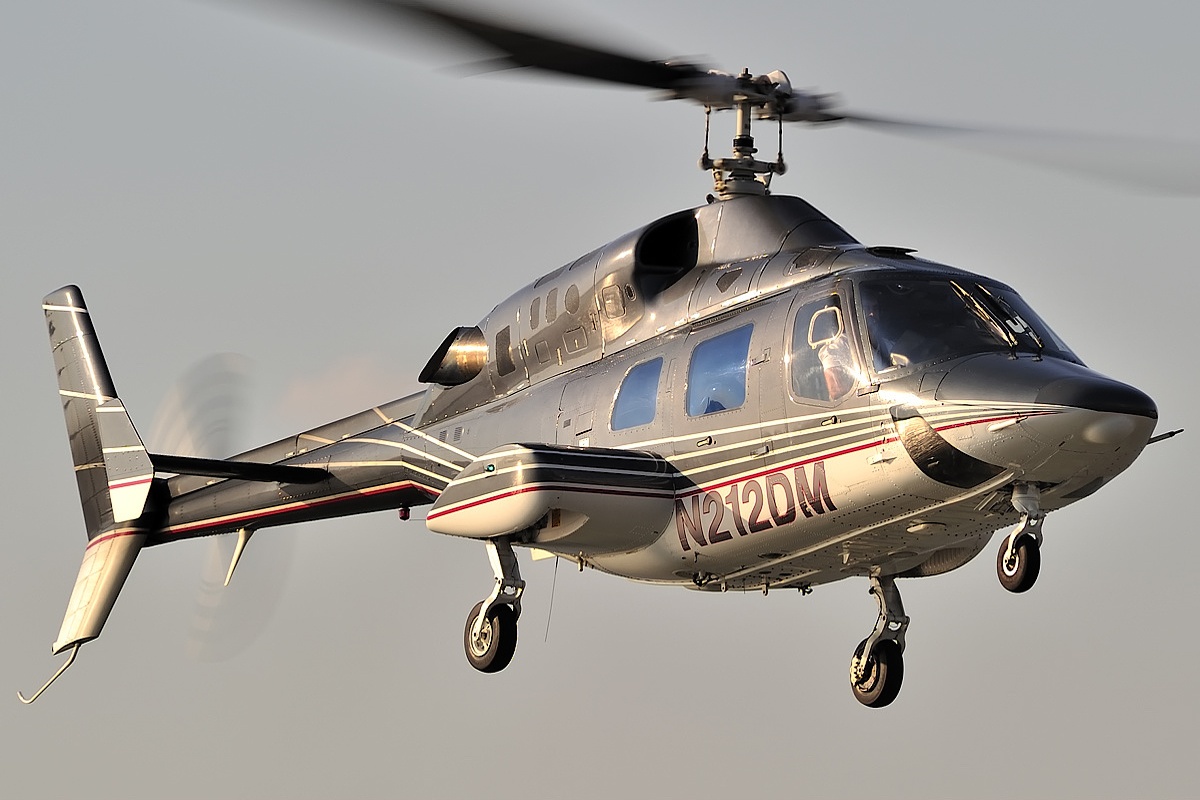 The Bell 222 is a twin-engine multi-purpose light helicopter manufactured by Bell Helicopter Textron. It is the first commercial machine with two turboshaft engines developed in the United States. In 1985, he also became a model for the study of a prototype D-292 for the US military. Globally, however, the twenty-two-two were most famous for their television series about a secret military high-tech helicopter with fictitious modifications, which was preceded by the opening film of the same name, Airwolf. In 2000, he also appeared as the personal helicopter of Senator Robert Kelly in the now cult film X-Men.

In the late 1960s, Bell began designing a new lightweight helicopter with a twin-engine drive. The model of this machine was first presented to the professional public in January 1974 at a congress dedicated to this type of aircraft with rotating airfoils. It was probably the 26th annual meeting of the Helicopter Association of America (HAA), held on 13-16. January 1974 in San Diego, California. Compared to previous types, this model was equipped with a number of advanced functions. The main ones included dual hydraulic and electrical systems, a retractable landing gear housed in sponsons and a Noda Matic vibration reduction system originally developed for the Bell 214ST helicopter. Production began in 1975 and the first takeoff of this timeless aerodynamic helicopter took place on August 13, 1976. This machine was certified by the Federal Aviation Administration (FAA) on August 16, 1979 and has been approved for VFR flights. December 20 of the same year. The company began delivery of helicopters on January 16, 1980, and in less than 18 weeks, on May 22, the type was also approved for instrument flights (IFR).

The Bell 222 helicopter is powered by two Lycoming LTS-101-650C-3 turboshaft engines, each with an output of 462 kW. In 1982, the company performed a power upgrade on the machines, when it was fitted with more powerful LTS-101-750C engines with an output of 507 kW and blades of the main rotor with a larger diameter. She renamed the helicopter modified as Bell 222B. The luxury version with improved systems and a luxurious interior was marked as the Bell 222B Executive, and thanks to the then lack of retractable chassis, the Bell 222UT variant with skis was also created in 1983. This model allowed the installation of larger auxiliary tanks in the chassis sponsons. During the 1990s, some of the 22 were replaced by one of the original Rolls-Royce 250-C30G / 2 engines, which partially improved performance (so-called engine-out). The machines modified in this way were redesignated 222SP.

In 1991, the company introduced a modernized Type 230 with new Rolls-Royce 250-C30G / 2 engines (formerly Allison 250-C30G / 2), minor modifications to the airframe design and an optional chassis. Versions 222 and 230 differ in appearance mainly by the location of the exhaust chimneys. In the first mentioned model, they are situated in the rear part of the rotors towards the rear, while in the case of thirty-two, they are directed upwards. The prototype took off for the first time on August 12, 1991, and the following year in March it received certification from Transport Canada Civil Aviation (TCCA). Serial production began in November 1992, when only a total of 38 pieces were produced in various versions, including flying ambulances (Bell 230 EMS). Production ended in August 1995, when the model was replaced by a longer and more powerful type Bell 430.

In parallel with the development of the 230 model, the company also began work on a study of a longer variant of the Bell 430 with a four-bladed main rotor. Work on this project was inaugurated in February 1992, using modified versions of the Bell 230 for the first two prototypes. The first of these aircraft took off for the first time in its new configuration on October 25, 1994 year. The Canadian certification was granted on February 23, 1996, and by the middle of this year, the company had begun delivering its first machines. Until May 2008, a total of 136 pieces of this version were produced and delivered.

This experimental helicopter was developed as part of the US Army’s Advanced Composite Airframe Program (ACAP), as part of a study involved in the Light Helicopter Experimental (LHX) program. The purpose of the ACAP program was to develop a complex hull made of lighter materials, which would be less expensive to produce than the then predominantly metal kites. In February 1981, the United States military entered into agreements with Sikorsky and Bell Helicopters Textron, with the former submitting a prototype S-75. Both companies were to build a total of three kites. One for breaking tests, the other for ground tests and an airworthy machine. The Bell D-292 used Avco Lycoming LTS 101-750C-1 engines (510 kW), double-bladed main and tail rotors, a gearbox and a complete tail section from the Bell 222 version. The metal was replaced by composites for greater strength, weight reduction and lower production and maintenance costs. Due to industrial problems and delays in funding, a single prototype (serial number D-292 85-24371) did not take off for the first time until August 30, 1985. 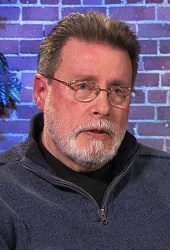 The entire design of this super-helicopter was designed for the series by the well-known art graphic artist Andrew Probert. However, the look of the machine is not the only thing he created for this series. He is also the author of both versions of the internal Electronic Data Command Center, the iconic emblem of the project, the complete costume of pilot overalls and other various items. The mentioned modifications of the helicopter were tested for the first time on a non-flying model, for the construction of which the very first Bell 222 (serial number 47 001) was used. According to her, the molds were made so that the modified parts complied with FAA specifications before they were installed in an airworthy machine.

The first flight of the modified helicopter was carried out by the factory pilot David Jones, who immediately afterwards enthusiastically announced to the manufacturer: “… the machine now flies better than before!”. Machine guns and cannons in the chassis sponsons were models simulating firing with spark plugs and fuel. In the film and later in the series, the ejection of these weapons was usually shown through detailed shots. This scene was actually created without a helicopter outside the filming site with the help of special pedestals. On the contrary, a stationary weapon system (rocket launcher) was mounted to the helicopter directly in the field or in advance in the hangar of the California company JetCopters Inc., which owned the machine during filming. The very name of the Airwolf project is associated with its film ability to fly in “turbo boost” mode, when it made a sound reminiscent of a howling wolf. It is also an integral part of its typical coating, consisting of a special gray color called Phantom Gray Metallic, specifically the shade DuPont Imron 5031X in combination with pearl gray on its abdominal side.

The sad fate of the film machine

One of the last pieces of the original Bell 222 type (serial number 47 085), sometimes unofficially referred to as the Bell 222A, was modified for shooting purposes. After the end of the series, all modifications were dismantled, the machine was repainted and finally sold to the German charter company Hubschrauber-Sonder-Dienst (today’s HSD Luftrettung and Blue Helicopter Alliance) where it was assigned a new registration number D-HHSD in June 1987.

On the afternoon of Saturday, June 6, 1992, he flew as a rescue helicopter with a badly burned little girl from Berlin to the University Hospital in Cologne. On the way back, however, the three-member helicopter crew was surprised by the sudden worsening of the weather. A strong storm and thick fog caused the pilot (42 years old) to be forced to fly over the German wooded slopes only with the help of instruments with a visibility of less than 30 m. This pilot’s fight with nature ended at 14:30 the impact on the wooded hill Burg (624 m ) near the Diabaswerk Halbeswig quarry. A local farmer was the first to inform the rescue services about the accident, but bad weather conditions hampered the search and therefore the wreck was not found until about an hour later. However, only the broken hull of the machine, the destroyed engine and three bodies of crew members without signs of life were found at the crash site.

After the entire area, including the access roads, was closed by the local police force and fire brigade, the Braunschweig Federal Air Transport Authority (BFU), in cooperation with the Dortmund police, began an investigation in the late afternoon. The day after the search for the wreck, the owners of the crashed helicopter were admitted to the site, who then picked it up from a wooded hill by another helicopter due to the inaccessibility of the terrain. Three days after the incident, the BFU issued an opinion identifying human error as the cause of the disaster.

In August 2006, an aviation museum was opened in the city of Sevierville, and the main attraction was to be a full-size replica of an Airwolf helicopter. From the non-flying Bell 222 machine and the original parts used in the series, it was created for this institute by the experienced craftsman Steven W. Stull, the creator of fully functional replicas of film helmets, which occasionally appear for sale on the network. It was placed in the permanent exhibition in 2007, unfortunately for God did not bring the expected interest of visitors in the next eight years, and therefore the management decided to sell it through the online auction house eBay. The replica was eventually obtained by a private collector from California, who had it modified (probably to airworthy condition) by West Coast Customs. Today, it stands at the heliport of the famous Billionaire headquarters in one of Los Angeles’ most exclusive neighborhoods, Bel Air.

* following the terrain profile and enabling flight between obstacles