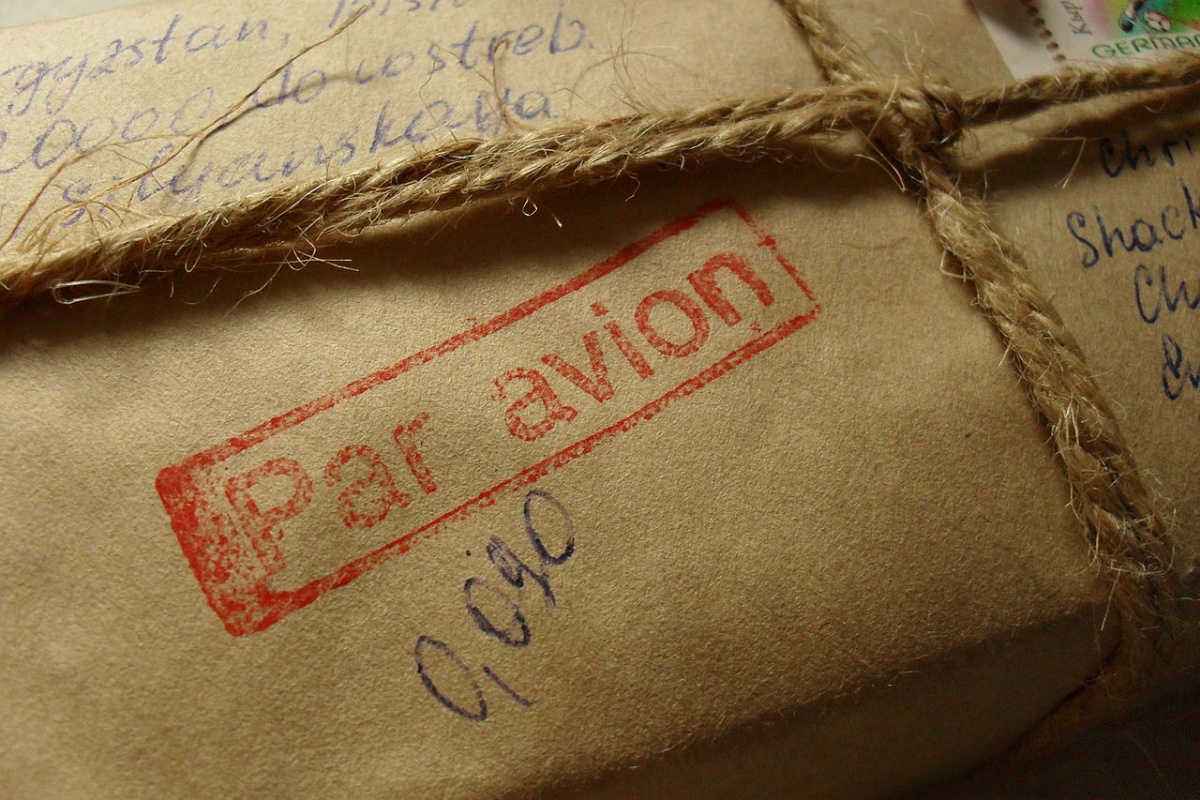 The history of sending messages by post dates back to ancient times, when the Egyptian, Roman, Persian, Chinese or Indian civilizations could already boast of its very good network. However, receiving and sending was reserved mainly for the monarch and only in exceptional cases was it also served to the public. Due to the great importance of the reliable delivery of messages over long distances for vast empires administered from one place, the postal service began to develop especially in ancient Rome during the time of Emperor Augustus, and the word itself originated from the Latin term statio posita (placed station). However, today’s article will be about air mail transportation, the history of which, surprisingly, also partially dates back to ancient times. 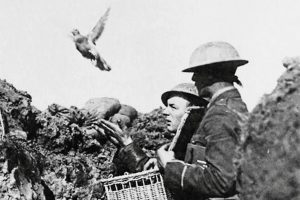 The above-mentioned civilizations, especially China, Egypt, Greece, but also the Roman legions used the so-called pigeon mail. For a very long time in human history, it was de facto the fastest way to transport important messages, especially of military importance. These trained birds thus played an important role in almost all of humanity’s war conflicts until the end of World War II. The Indian Post even used them until 2008. However, the disadvantage of this type of transport was that the pigeon could only carry a limited load and also the fact that it could only deliver messages to the place of its native pigeon loft. With the advent of the invention of the balloon and later the airplane, this type of transport logically began to be used less and less and today it is only a hobby or a sport for pigeon breeders.

A technician takes over the service 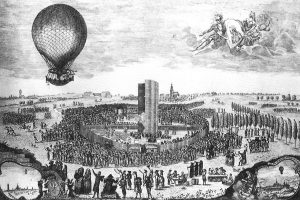 The first mail carried by air using a lighter air device took place on January 7, 1785, when Jean-Pierre Blanchard and John Jeffries flew a hot-air balloon from Dover, England, to France, landing near Calais. It was a letter written by the American loyalist William Franklin to his son William Temple Franklin, who at the time was working as a diplomat with his grandfather Benjamin Franklin in Paris. During Jean-Pierre Blanchard’s first flight over North America (from Philadelphia to Deptford, New Jersey) on January 9, 1793, the aforementioned pilot carried a personal letter from George Washington. It was to be delivered to any landowner on which Blanchard landed his balloon, making him the proud owner of the first delivered mail in the United States. However, the first official delivery of mail did not take place until August 17, 1859, when John Wise was sent with the Jupiter balloon from the American city of Lafayette to New York. But weather problems forced it to land near the town of Crawfordsville, Indiana, and the mail was then sent to its destination by train.

A few years later, the French, together with pigeon mail, used them during the siege of Paris and the city of Méta in 1870-71, but the first organized field balloon mail was not created until the beginning of 1915. At that time, they were launched from the still Austro-Hungarian fortress of Přemyšl (today’s Przemyśl) 10 unmanned balloons with several thousand specially made postcards. 4 crewed lookouts were then sent behind them, carrying the remaining mail in their gondolas. However, these four balloons were captured by the Russians, and the Danish Red Cross eventually delivered the field mail to the addressees. During World War I, several military balloon formations were even established, but they were used more for observation and barrages for air defense than for transporting shipments. It turned out that this device is too dependent on weather conditions and therefore unreliable, so they were not used much for this purpose. Today, in this direction, it is only a commercial and philatelic matter. 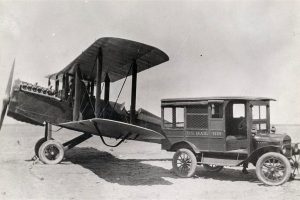 After the presentation of a fully controllable airplane by the Wright brothers in 1903, they also began to consider their use for the transport of mail. Due to America’s initial lack of interest in this invention, the first but unofficial mail flight from Petaluma to Santa Rosa, California was not made on this continent until February 17, 1911. The machine was piloted by Fred Wiseman and had only three letters on board. The first day was won by aviation pioneer and air show organizer Sir Walter George Windham in the then United Province of Agra and Oudh, which was part of British India. This was due to him obtaining permission to operate an airmail service from the Postmaster General of India to generate publicity for the exhibition and raise money for charity. Mail from people from all over the region was collected at the Holy Trinity Church in Allahabad. The Humber-Sommer biplane, piloted by Henri Peguet, could hold an incredible 6,500 letters at the time, which were then transported from Allahabad to Naina, the nearest railway station on the Bombay-Calcutta line. At that time, the machine covered a distance of 13 km in 13 minutes and the letters bore the official designation – First Aerial Post, UP Exhibition, Allahabad. 1911.

The first official airmail delivery for the United States Post Office was made by pilot Earle Ovington. This happened almost eight months later on September 23, 1911. A few years later, in July 1914, French pilot Maurice Guillaux made the first official mail flight to Australia. He overcame a distance of 940 km on his Blériot XI machine, making it the longest flight in the world at the time. In addition to specially printed postcards, he carried a meager supply of Lipton tea and lemonade from Melbourne, England, to Sydney.

The second world first took place on 9 September 1911 in England when, at the suggestion of Sir Walter Windham, a regular postal service was started as part of the coronation celebrations of King George V. The route ran between the suburb of Hendon in North London and Windsor in Berkshire. From there, the parcels went first to the postmaster general’s office and only then to their recipients. Gustav Hamel, who piloted the first machine on this route, covered the distance of 34 km in just 18 minutes. Although the service existed for less than a month and only 16 flights were made, it managed to transport 35 bags of mail. The reason for the termination of this service was the constant delay, which increased over time due to bad weather conditions. Before World War I, similar services were occasionally operated by other countries, including Germany, France, and Japan, where airmail was introduced in early 1912. However, they soon encountered similar atmospheric weather fluctuations and services were likely to be suspended or canceled altogether.

Accelerated technological progress during the war allowed airmail to finally become a regular, reliable and permanent service after it ended. In the United States, this type of mail transportation was started on May 15, 1918, and one of the routes, Washington-Philadelphia-New York to be precise, was designed by aviation pioneer Augustus Post. For domestic airlines in 1931, air mail accounted for 85% of their total profit. 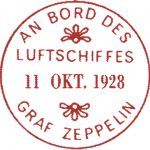 On the contrary, in Germany, between 1908 and 1939, airships known as Zeppelin mail or steerable mail were widely used for these purposes. This service began in July 1908, after the first parcels were loaded into the Zeppelin LZ 4 airship. The delivery celebrated its first successes and therefore LZ 3 began to be used for this purpose. The following year, from August to October, LZ 6 also flew with this cargo ( Z III) and in this period the airmail stamp was also used for the first time on documents. It was oval in shape with the inscription Luftschiff/Signalpost around the top edge, a depiction of a Z III airship in the middle and the inscription Zeppelin on the bottom edge. In the end, several of these stamps were used until 1911. One of them was issued during the flight to a small postal station located directly on board the Zeppelin. It had a classic round shape with the words An bord des/Zeppelin/Luftschiffes and the date in the middle. After the takeover of these machines by the German army, public parcels could no longer be transported by air even though the military commanders had prepared special stamps.

In the interwar period, this service was quickly restored again, and so already at the end of 1919, shipments were transported by the airship LZ 120 Bodensee. This machine served with the German Airmail until 1921, when it was handed over to the Italian Navy as part of war reparations. Mail was also briefly sent inside LZ 126 in 1924, but only until it was delivered to the United States Navy again as a replacement for their lost machines in World War I. The US NAVY later renamed it USS Los Angeles (ZR-3), but under allied conditions it could only be used for commercial flights and therefore most often carried mail on the Lakehurst-Bermuda-Mayagüez route. 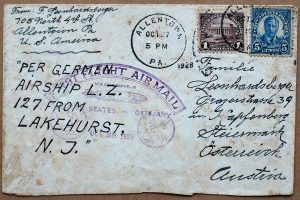 After four years in Germany, these donated machines were replaced by the LZ 127 Graf Zeppelin, which took off for the first time in September 1928. It was also the first air mail route that went from Germany directly to the USA and back. Already during the first return flight, 52,000 postcards and 50,000 letters were transported by this airship. Until June 1937, when it was decommissioned, it managed to transport approximately 12 tons of mail to dozens of countries around the world during 590 flights. Shipments were also transported by the famous LZ 129 Hindenburg, which, although it burned down during the Lakehurst disaster, managed to transport 17,609 pieces of letters, postcards or parcels in its 14 months of existence. The mail that was saved from the burning wreckage of the airship is today a highly valued philatelic document. As this disaster completely destroyed the excellent reputation of the Zeppelins, the LZ 130 Graf Zeppelin II was the last machine to carry civilian mail. Only 30 flights were made by him on the territory of Germany, and even those were for the most part espionage or propaganda in nature.

However, international flights were not only the domain of the Germans, the postal section of the Royal Engineers (RE) unit of the British Armed Forces was also dedicated to them. From December 1918 until mid-1919 they delivered express mail on the Folkestone-Cologne route to British Army units stationed in Germany. During the 1920s, the Royal Air Force (RAF) continued to develop these air routes through the Middle East. However, the first international mail flight was made on December 25, 1918 by the airline Latécoère (later the famous Aéropostale), when it delivered mail from Toulouse, France to Barcelona, ​​Spain. In less than two months (February 19, 1919), Latécoère Airlines extended this route to Casablanca, Morocco, making it the first transcontinental air service. In contrast, the Colombian airline Scadca was the first to deliver (albeit only domestically) mail using seaplanes landing on the country’s rivers. In Australia, Brearley’s Western Australian Airlines began providing these services, carrying the first mail on the Geraldton-Derby route on 5 December 1921.

The first but only test flight with postal parcels in Czechoslovakia probably took place on July 13, 1919. In October of the same year, according to a press release at the time, the regular transport of mail on the route Užhorod-Lučenec-Bratislava-Prague was started, when parcels were eventually transported by both directions twice a week. In the beginning, flights were provided by the military air force and only state mail was transported. In the pre-war period, airplanes were widely used to transport mail, which then continued in post-war Czechoslovakia. 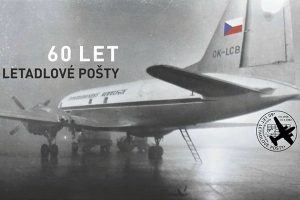 About four routes (courses) of air mail in our country were designated by this term. The first (Prague-Bratislava-Košice) with flight number 2001 was launched on June 4, 1956, with the return direction marked 2002. Another airmail (Prague-Přerov-Bratislava-Zvolen) established on April 8, 1957 was marked 2005 and the opposite direction number 2006. The course of flight No. 2005 was modified from 1960 to Prague-Brno-Ostrava-Zvolen and No. 2006 to the route Zvolen-Brno-Přerov-Prague. In the same year, a third Prague-Ostrava route was launched with the flight number 2011, its return direction then had the following number, i.e. 2012. The last domestic airmail (Prague–Ostrava–Prague), operated even after the dissolution of Czechoslovakia, was canceled on September 30 2010. In the years 1952 to 1981, this service was also an ambulatory post, as the mail was sorted and further processed directly on board the aircraft.