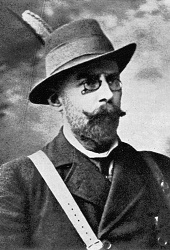 Ing. Gustav Victor Finger was a Czech aviation pioneer, designer and founder of the Aviation Department of the then Technical Museum of the Czech Kingdom (today’s National Technical Museum in Prague). He was also probably the first Czech to play with the idea of ​​using the principle of reactive propulsion in practice.

He was born on 30 June 1854 in Řepín u Mělníka into a family of overland Josef Finger. He graduated from high school in Prague and during military service with the Hungarian cavalry regiment in Transylvania also a military artillery school. Then he went to study mechanical engineering in Germany. After his return, he worked in the Tašek & Weis Engineering Works in Prague and later in Waldek & Wagner. In his free time, he devoted himself to educational and promotional activities, especially lectures in the Association of Engineers and Architects, Industrial Unity and various student organizations.

The participation of French aeronautics at the Jubilee Regional Exhibition in Prague gave Czech enthusiasts and aviation pioneers a strong impetus for the establishment of the Czech Aeronautical Society. One of these airmen, Eduard Surcouf was also hosted by the first meeting of interested parties held on September 23, 1891 in the restaurant on Bezovka. Gustav V. Finger was a founding member of the executive of this company, which was officially confirmed by the governor’s decree 36.042 on 10, April 1892. In his membership he saw, among other things, the hope of getting money for his later project of the airplane Cyclone. At that time, Professor Karel Václav Zenger, who tried to use the Prague balloon to observe the solar eclipse, became the chairman.

In 1892 he designed an airship powered by a propeller in a long cylinder, passing through the axis of the carrier balloon. However, in the following years he decided to work only on studies of aircraft structures heavier than air. Three streams later he developed a design of the cyclone, whose essence was the so-called propulsor, consisting of a long tube with two propellers. It was actually the principle of a reactive engine. In this way, he wanted to solve the driving force through the cold airflow, while apparently hoping that its propulsion would provide the aircraft with sufficient stability and contribute to the buoyancy of the aircraft. The final arrangement of the propellers, however, has not yet been clarified and also did not allow for significant losses of energy in the tube of the propulsor. Another obstacle in development was the financial situation, which, despite all efforts to obtain the necessary amount through lectures, articles in technical magazines and events of the Czech Aeronautical Society did not allow to build a prototype.

Thanks to these efforts to popularize aviation, however, many individuals have also turned to him for an assessment of their inventions. For this reason, V. Karmazín later called it the first Czech flight engineer. G. V. Finger after various disagreements with other members of the aeronautical company, but on July 30, 1895, again came back. Two years later, more specifically on April 13, the company broke up. In the same year, when he designed his Cyclone, in 1895, he published a book called The Study of Aeronautics, which at that time was only the second file in the aviation field published in Czech. In the same year, he began publishing the Epoch monthly, which he originally intended as an aviation magazine, but due to his lack of interest in this field, from the second year he transformed it into a general technical periodical with a permanent column on aviation. Over the past six years, it has been distributed to E. Weinfurter.

In 1896, Swedish engineer Salomon August Andrée prepared a balloon trip to the North Pole. Gustav V. Finger wrote on September 19, 1896 to his colleague letter in which he before flying uncontrollable aerostat to the pole warned. Andrée Andrée, however, rejected his doubts in a postcard on October 5, 1896, and the expedition subsequently ended tragically.

In 1897 he saw the first Benz petrol car in Vinohradská Street and immediately understood that the future aircraft propulsion would not be a steam engine, as he had hitherto believed, but a much lighter gasoline engine. After a series of failures in aviation in 1897 for a time suppressed. In the same year he greatly contributed to the establishment of the Patent Association in Prague. In 1903 he opened a technical agency in Královské Vinohrady (today the city district in Prague) and returned to lectures and publications together with the flourishing of aviation in Europe in 1908. His first printed articles include a column titled What is the significance of the last attempts of air navigation. This year the Technical Museum of the Kingdom of Bohemia was established (today’s National Technical Museum in Prague). Two years later, thanks to the great efforts of G. V. Fineger, it was decided to establish the Aeronautical Department XVII. Group Transport. In the first building of the Museum of Schwarzenberg Palace in Hradčany he later created a permanent aerial exhibition.

Hermann Ritter gave a lecture on Finger’s Cyclone in Wiener Flugtechnischer Verein (Vienna Air Force Unit) on May 1, 1908, unfortunately again without much response. Finger’s hopes turned to France, where he received on January 19, 1910 patent No. 408 205. Unfortunately, he received no further support or funds. The Austrian patent application was rejected on June 21, 1911, explaining that it does not bring anything new and that similar patents are already patented abroad. For example, Rudolf Krocker from Teplice had his idea patented in Great Britain in 1899, Austria on April 15, 1901 (No. 4050) and in America on November 4, 1902 (No. 712.689). He saw the first Blériot plane in Prague on November 19, 1909, and two years later witnessed the memorable flights of Jan Kašpar and Evžen Čihák. He welcomed these admirable performances and highly praised them. However, until the end of his life, he believed in the correctness of his idea and hoped for the realization of his aircraft, as evidenced by a statement with a bitterness of failure at the aforementioned exhibition in Prague, where he declared:

If there were no limited opinions, we could exhibit a Czech airplane in Paris today.

Gustav V. Finger died in Prague on March 25, 1919. According to his study, the aircraft was built in 1910 by V. Vondráček, unfortunately never finished it. The world had to wait for the first functional aircraft until 1932, when it was built on this principle by Italian designer Luigi Stipa. His experimental machine is known under the official name of Stipa-Caproni, but the press renamed it Flying Barrel or Flying Tunnel.