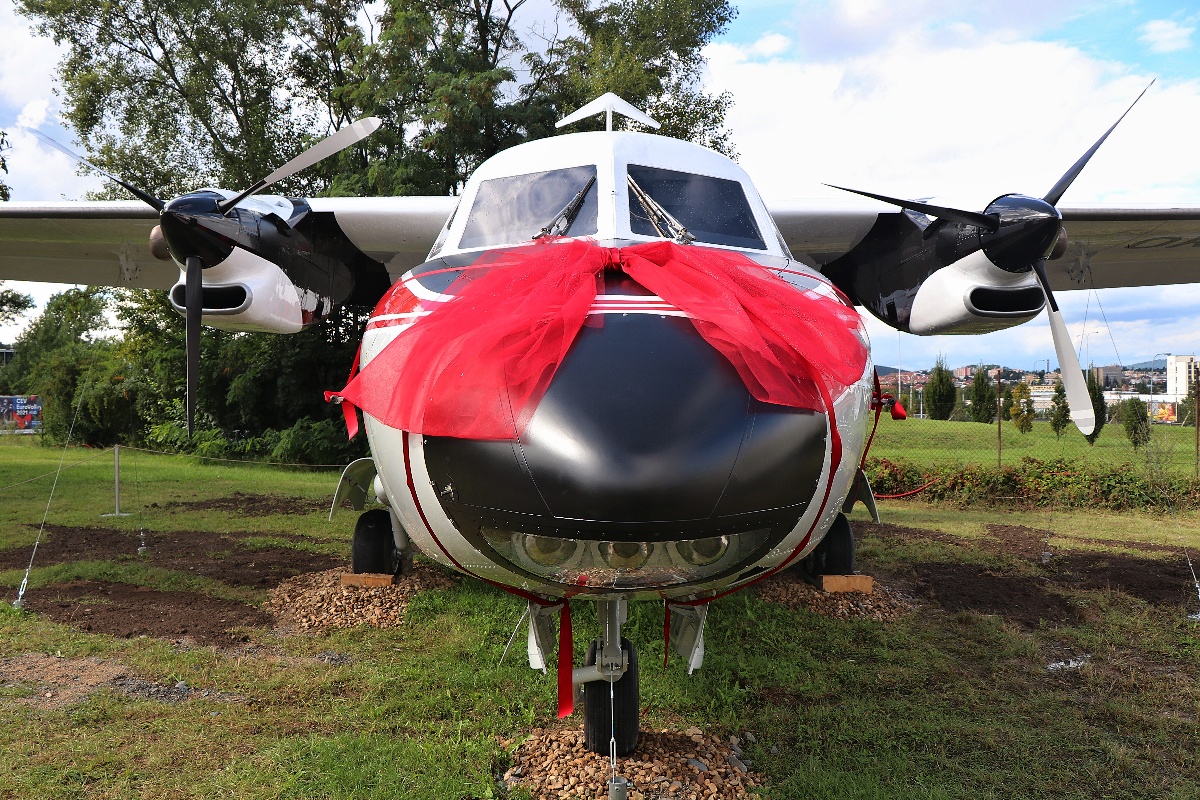 On Saturday, an event called Sixties with the Technical Museum took place in Brno, organized for the round 60th birthday of this institution. A rich program was prepared for visitors throughout the day, supplemented by sightseeing tours by historic public transport cars. Not only historical cars or presentations of the Brno Police History Club were on display, but also the largest collection of signatures of astronauts in the Czech Republic or a fashion show of period clothing called From lacing to a miniskirt. The whole event was symbolically completed around half past three in the afternoon with the ceremonial handover of the newly restored Let L-410A aircraft with OK-ADO registration.

This aircraft has a unique value for the Brno Technical Museum. In September of this year, exactly fifty years will have passed since the 400 when they first visited Brno. This happened during the International Engineering Fair in 1971, when these aircraft were first introduced to the general public. For the entire duration of the exhibition, visitors were prepared not only a static demonstration of the OK-ADP registration aircraft in front of the Omnipol foreign trade company, but also the so-called trade fair line from Brno to Prague and back, on which OK-ADN and OK-ADQ aircraft flew. It was launched on 9. September 1971 by landing the second mentioned aircraft at Brno Airport, which was then piloted by Captain Bedřich Růžička. The aircraft, which was acquired by the Technical Museum in exchange for the Mig-21 MFM (so-called gray), was still considered by both institutions in July this year as the installed machine on the exhibition grounds in 1971. replaced by an actual registration and therefore it was not possible to confirm or refute this fact with complete certainty.

It was only during August that new documents and photographs were accidentally discovered, with the help of which it was possible to determine exactly which forty-four were actually installed on the exhibition grounds at that time. In the end, it turned out that it was an OK-ADP registration plane exhibited in the exposition of the Kunovice Museum. Nevertheless, ADOčko is a valuable exhibit for the Technical Museum in Brno, as it is the last specimen from the five-piece pre-series series. One of these five aircraft was used for breaking tests, the other was retained by the manufacturer and the remaining three (OK-ADO, -ADN and -ADQ) were then put to the Slov-Air Bratislava verification operation for testing. These machines differed from the prototypes mainly by the redesigned main chassis and auxiliary keel area. The flight of the OK-ADO aircraft took place on 30. September 1971, so this year this new exhibit will celebrate fifty years of its existence. After obtaining a certificate of airworthiness (17. October 1971), he continued to serve the airline Slov-Air until 1976. This year, by decision of the then Ministry of Transport, all Slov-Air machines, including crews and other related personnel, were transferred to Czechoslovak Airlines.

At CSA, this machine flew until 1982, when it was decommissioned and then handed over to the Slovácko Aeroclub Kunovice. The aeroclub then used it together with OK-ADP for very popular sightseeing flights and parachute landings. He was later included in the depository of the then Slovácko Aviation Museum, where he managed to keep it on display in the exhibition and survived uncertain moments in the history of the Kunovice Museum. In October 2019, the museum, as part of a joint cooperation with the Brno Technical Museum, exchanged it for a duplicate grayscale. Despite the fact that the Brno Museum acquired a technically better-preserved machine, it was necessary to carry out a demanding conservation-restoration intervention on it for more than a year, so that it could then be ceremoniously presented to the general public and imaginary returned to Brno where it undoubtedly belongs.