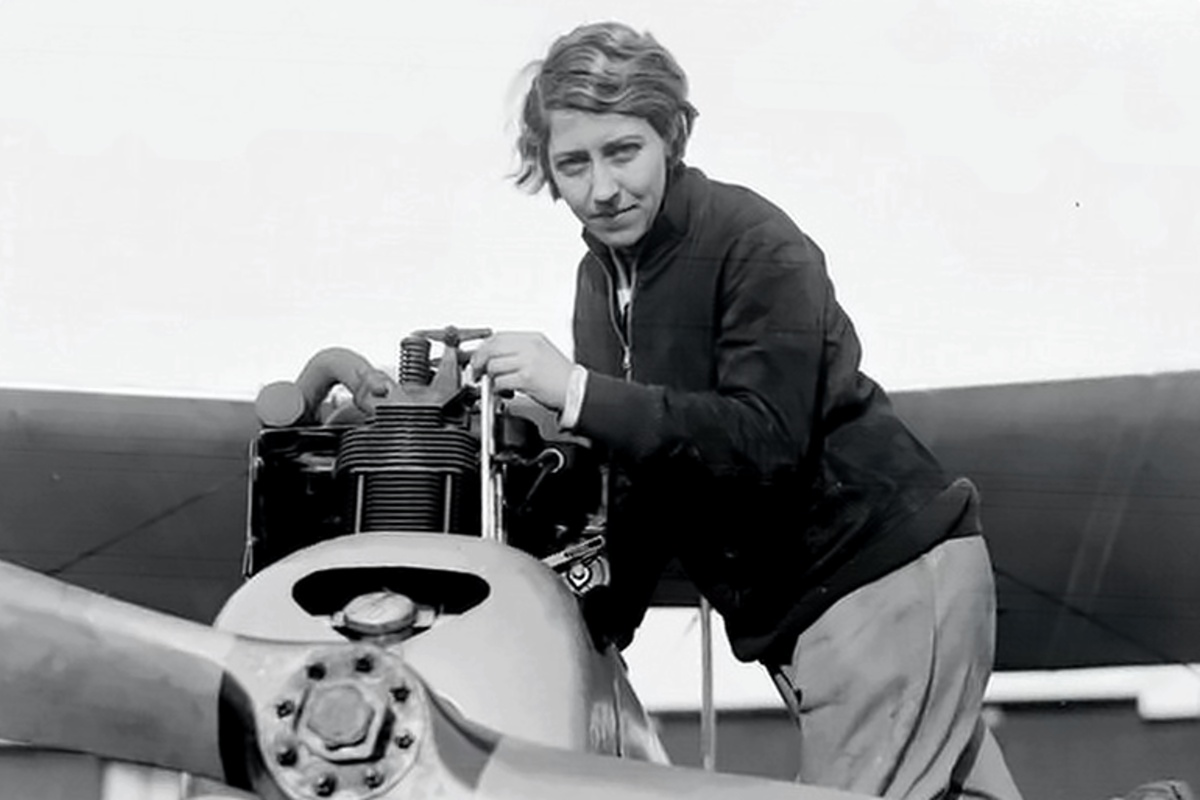 If a pioneer in women’s flying is mentioned, perhaps everyone will remember Amelia Earhart’s life story today, even though “only” a few films have been made about her. It is therefore a pity that her British successor Amy Johnson, who set many aviation records during her life and broke those personal times several times, is still very little known and thus remains in the shadow of Amelia’s popularity. So let’s take a closer look at the life of this English record holder, whose life coincidentally was also ended by a mysterious death.

The famous pilot was born on July 1, 1903 in Kingston upon Hull, East Yorkshire. Her mother was Amy Hodg, the daughter of the local mayor, and her father, John William Johnson, came from a family that owned the Andrew Johnson & Knudtzon Ltd fish export trading company. By the way, this company still exists and is rightly proud of its founders. As the eldest of three sisters, Amy studied at Boulevard Municipal Secondary School (later Kingston High School) and the University of Sheffield, where she earned a bachelor’s degree in economics. After graduating, she worked as the secretary for William Charles Crocker’s lawyer. During this time, she became intensely interested in aviation, thanks to which she managed to obtain on January 28, 1929, first flight license No. 8662 and later on July 6 of the same year also a category A pilot’s license No. 1979.

She obtained both of these documents at the London Airplane Club, where her mentor was Captain Valentine Henry Baker, an ace of World War I and co-founder of the Martin-Baker Aircraft Company. That same year, she also became the first British to hold a C category engineer. Amy Johnson also helped found her friend and colleague Fred Slingsby (owner of Britain’s most famous glider company) Yorkshire Gliding Club on Sutton Bank Hill, where she was in the 1930s. first member and trainee. 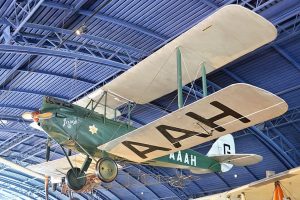 She received funding for her first plane from Lord Wakefield and her father, who had always been one of her biggest supporters. The first second-hand machine was the de Havilland DH.60 Gipsy Moth with G-AAAH registration, which Jason named after her father’s trademark. She received worldwide recognition in 1930, when she became the first woman to make a solo flight from England to Australia. It took off on May 5 from the then only English international airport, Croydon in Surrey, to land nineteen days and after 18,000 kilometers, successfully at the then small civil airport Darwin, about 6 km northeast of the city of the same name. Unfortunately, six days later, she damaged her biplane during a wind landing at Brisbane Airport. While her machine was being repaired, she flew as a passenger with Captain Frank Follett to Sydney. Captains Lester Brain later flew the Johnson’s airliner to the Mascot suburb of Sydney. Today, the green and white Jason is permanently on display at the Flight Gallery of the Science Museum in London’s Kensington.

For her courageous solo flight, she received the Order of the British Empire (CBE) from King George V on May 30, 1930 as part of King’s Birthday Honors. She also received the International Harmon Trophy in the Aviatrix category and the first Civil Pilot license (according to Australian rules of 1921). In order to continue her career as an air pioneer, she was given a brand new machine de Havilland DH.80 Puss Moth with matriculation G-AAZV, which aptly named Jason II. In 1931, Amy and co-pilot Jack Humphrey became the first people in this aircraft to fly from London to Moscow in a single day, a 2,830-kilometer route that took them about 21 hours. From there, they continued through Siberia to Tokyo, setting a new British time record needed to travel to Japan. In 1932, Johnson married Scottish pilot Jim Mollison, who asked for her hand during a joint flight just eight hours after they met. 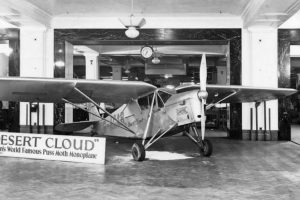 In July of the same year, she set a new solo flight from London to Cape Town with the de Havilland DH.80 Puss Moth with G-ACAB registration. With this flight called Desert Cloud, she broke her husband’s previous record. Interestingly, the flight was promoted by De Havilland and Castrol Oil, which featured them in their advertising campaigns at the time. Another joint success this time was the flight from Pendine Sands in South Walles to Brooklyn’s Floyd Bennett Field in New York in July 1933. The goal was to symbolically bring a book version of the Old English poem Seafarer and achieve a world record in non-stop flights. However, as they approached the coast of the American continent during the night, they ran out of fuel and were forced to make an emergency landing not far from New York at Bridgeport City Airport (now Sikorsky Memorial Airport). The landing was also not soft, the machine both threw them out of the cockpit due to landing off the runway of the airport. However, the couple was lucky and did not suffer any serious injuries other than cuts and scars. After treatment and recovery, they both attended the Ticket Tape Parade on the famous Wall Street, where they were celebrated by the entire New York company. 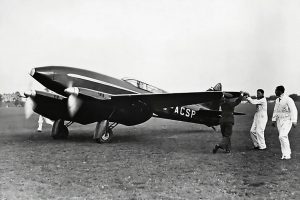 The Mollisons did not lag behind, and the following year they took part in the MacRobertson Air Race in a de Havilland DH.88 with a G-ACSP registration. Although they achieved record time with this machine named Black Magic, they were forced to land at the first stop in Allahabad, India (today’s Prayagraj) due to a serious engine problem, and eventually withdraw from the competition. In September of that year, Amy Mollison became the youngest president of the Women’s Engineering Society, where she was “only” its vice president since the beginning of the year. She then remained active in society until her death. The last record flight that Amy Johnson (still under the surname Mollison) made on May 4, 1936, was to regain the record of a flight from England to South Africa in a Percival D.3 Gull Six with G-ADZO registration. In the same year, she was awarded the Royal Aero Club Gold Medal.

The year 1938 was not very happy for Amy Johnson, she first overturned her glider when landing at Walsall Airport and then divorced her husband. After parting, when she adopted her maiden name Johnson again, she became interested in other ways of earning money, such as business, journalism and fashion. One of them was the collaboration with designer Elsa Schiaparelli, who created a travel bag later sold under her own name. The following year, she began flying for the Isle of Wight Aviation Company on a short route from Portsmouth through the Strait of Solentee and the resort of Southsea to the Isle of Wight. The aircraft she flew served in this county as a training target for artillery battery headlights.

Unfortunately, in March 1940, all the aircraft of this airline were taken over by the Ministry of Aviation for the purposes of the war effort. Johnson, along with all other pilots, was fired for redundancy and received a five-week salary of a total of £ 200 as severance pay. In May, she decided to join the newly formed Air Transport Auxiliary (ATA), which carried RAF aircraft throughout the UK. Under the guidance of her friend Pauline Gower, she gradually reached the rank of First Officer, ie the first officer. She then described her typical day at ATA in a humorous article for The Woman Engineer magazine, published only after her death in 1941. 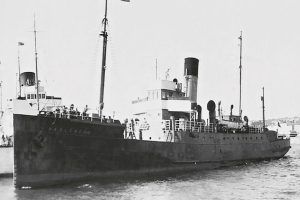 Unaware of her tragic death in a few days, Amy wrote a New Year’s card to her friend Caroline Haslett, saying, “I wish you good luck and hope that God will protect you this year.” Airspeed Oxford from Prestwick to RAF Kidlington Airport near Oxford deviated from the course due to adverse conditions, and some speculation suggests that the aircraft ran out of fuel and therefore jumped out of it before it hit the ground near the seaside town of Herne Bay. Some ships from a fleet of warships near the Thames estuary saw the rapid rescue operation, which was complicated by a severe winter, falling snow, stormy seas and a heavy tide, and the first to arrive at Johnson’s crash site was Lt. Cmdr. Walter Edmund Fletcher, captain of the small dam balloon HMS Haslemere. at sea she could not get and subsequently disappeared below the surface.

Captain Fletcher waited for nothing and devotedly jumped into the stormy sea to save her. He also succeeded for a few minutes, but he also soon showed general exhaustion and hypothermia. Therefore, he failed to keep her in his frozen and frail hands until the lifeboat came to him, and he was being pulled out of the water unconscious. He died a few days later as a result of hypothermia in the hospital. A few days after the tragic event, a parachute, a pilot’s diary and a checkbook of the deceased pilot floated to the sea near the crash site. A funeral service for Amy Johnson was held on January 14, 1941 at St. Martin in The Fields, standing on the north-east corner of Trafalgar Square in central London. Lt. Cmdr. Walter Edmund Fletcher, who tried to save the pilot and paid for it with his own life, was posthumously awarded the Albert Medal for Rescue in May of that year. 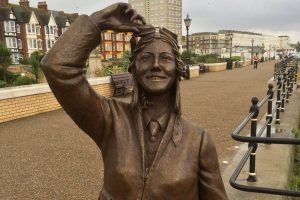 The circumstances surrounding the pilot’s death remained unclear for a long time, and it was not until 1999 that the news appeared that the reason for her tragic death could be an unfortunate coincidence. According to a certain Tom Mitchell from Crowborough in East Sussex, her plane was shot down by her own artillery after entering the wrong identification code twice in a row. Then, according to him, “Sixteen rounds were fired and the plane fell to the ground near the mouth of the Thames. We all thought it was an enemy plane. It wasn’t until the next day that we read in the paper that it was Amy. The officers told us never to tell anyone what happened. ”In 2016, the thesis of historian Alec Gill added that the crew member’s son said that Johnson had died as a result of her body being sucked into the propellers. Although the ship’s crew member did not see it with his eyes at the time, he believes it to be true. Since her body was never found, she does not have her own grave and her name is listed “only” on the Air Force Memorial in Runnymede.

After her death, she received many honors and honors over time, named places, buildings and even two transport aircraft (KLM McDonnell-Douglas MD-11 and Boeing 787-9 Norwegian Air UK). In addition, her name has hit songs, radio shows, movie screens or fiction, which could help bring her name back to the attention of the current general public living outside the UK. During her “relatively” short life, Amy Johnson managed to win many of the first championships and records of her time. Given the quality of her flying skills, I dare say that she was a much better pilot than Amelie Earhart herself. And even though her life ended tragically and under mysterious circumstances, she was a woman who had lived her whole life. Personally, I think it’s a shining example of how each of us should live our lives. Don’t be afraid to take risks and go for your dream, even at the cost of not succeeding for the first time.