Today, exactly one hundred years have passed since the first plane was shot down from the sky. This happened when the crew of the French airplane Voisin III returned from the bombing mission to the enemy territory. Due to the great coincidence of events, French General Franchet D’Espere witnessed the whole event, and it was not difficult to prove (despite the rumors from the then German press) the shooting of a German machine.

On this day, Sergeant Joseph Frantz and his shooter / mechanic Louis Quenault were ordered to fly over the enemy fortifications near the village of Brimont and to knock on him six modified 90 mm grenades. The road to the finish and the climbing ammunition itself went smoothly, but when returning to the Marne airport, Frantz saw an airplane with German sovereign emblems in the air. Frantz took advantage of the better position of his bomber aircraft and approached him unnoticed. As soon as the enemy machine was in range, Quenault launched a massive fire from his Hotchkiss M 1909 machine gun.

The crew of the German reconnaissance machine Aviatik B.I almost immediately returned fire, but the infantry rifle held by Lieutenant Fritz von Zangen was only a weak defense against a 8 mm machine gun. Before Quenault completely stuck a machine gun shot on the enemy plane 96 wounds. While he tried to get him back into operation, he shot at the rifle at least from his rifle. Pilot of Aviatics, Sergeant Wilhelm Schlichting eventually did not manage his airplane, which overturned in the air on the back and the burning shattered the ground. The crash of this machine has not survived. In memory of this historic event and in honor of the victors and fallen, a memorial is now in Jonchery-sur-Vesle. 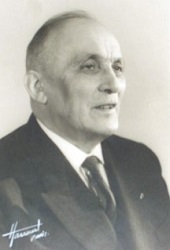 He was born on 7. August 1890 in Beaujeu. At the age of twenty, he obtained a pilot license in Mourmelon. Just before the Great War he worked for Robert Savary as a test pilot. He participated in a number of competitions and in 1911 he managed to set the world’s first record when he crossed two passengers over the Notre-Dame Cathedral in Chartres. By the end of 1912, he was called to the army. A year later, on 13. September, he took part in Toulouse’s air maneuvers and set another world record for the same year, this time with three passengers.

Soon after he was awarded the Order of Honor Legion for the first air victory, he began to work with Voisin. He worked not only as a test pilot, but thanks to his engineering knowledge, he also contributed to the development of a total of 12 aircraft prototypes. In 1920 he founded a Boulogne-Billancourt aircraft repair company. As the founding president of the Vieilles Tiges Association, he founded the Pionniers magazine in 1964. Heavy-air helicopters piloted up to his eighty-year-old, and during his lifetime he had three more awards. He died on 12. September 1979 at the age of 89.

*The standard rifle of the state’s army during the First World War, which did not belong to the usual armament of the machine.