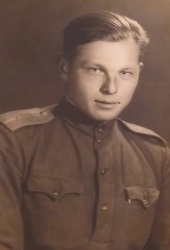 The citizens of Brno-Kohoutovice today commemorated the anniversary of the liberation of this city part by the Soviet troops. The story, which relates to this commemorative act and became the key during the final struggles for this part of the city, began seventy-three years ago.

The end of the war was already falling, but Kohoutovice in Brno still fought hard. The German troops, vigorously defending their positions, were expecting great reinforcements at any moment to help them regain the lost area. The Soviet command therefore issued an order to bomb the approaching column from the air to prevent further unnecessary losses. The next day, from the base of the 486th Fighter Regiment, two Lavochkin La-7 supporting aircraft were flying toward Kohoutovice with a clear target. The two pilots managed to drop more or less successfully the bombs, unfortunately one of the machines was badly hit by a flame and flames fell into the local Holedna field.

The local remains were placed just after the war some 10 meters north of the lake, which is located under the monument today and half of the wing was built as a tombstone. Only in the seventies of the last century, thanks to the numbers of parts found on the fragments, was able to find out that the pilot was a ppor. Viktor Sergeyevich Kashutin, serving at the then-mentioned 486th Fighter Regiment, the 279th Fighter Division. The town districts of Kohoutovice and Zebetín left a stone memorial in the spotlight on the occasion of this event. The ceremonial revelation was then held with the participation of the ČSLA and the related airmen on the 30th anniversary of the end of the war.